When my wife and I were traveling in Georgia, we stayed at a bed and breakfast near Madison. The inn is situated on over 88 acres of farmland, forest, and river, and teems with wildlife from birds to insects. We spent the entire day of June 14, 2014 exploring the grounds. Along one forest edge I was fortunate to find a female nursery web spider, Pisaurina mira, guarding spiderlings. She was perhaps falling down on the job, though, as another spider appeared to have free run of the nursery web, feasting on spiderlings. 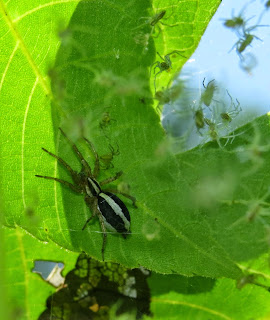 A female P. mira is a formidable creature. She can measure 12.5-16.5 millimeters in body length, with an impressive sprawling legspan. Her size alone would seem to be intimidating enough. No matter, apparently, to a female ground spider, Cesonia bilineata, which was present in the nursery web among shrubbery well off the ground. Adults of this spider are half the size of the nursery web spider, female C. bilineata being a mere 4.3-7.0 millimeters from front to back, and with much shorter legs. 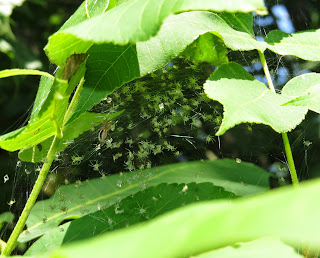 I did not observe the ground spider in the act of feeding on the spiderlings, but she was more plump than usual. There were living spiderlings and shed exoskeletons from spiderling molts present in the nursery web.

Cesonia bilineata might make a habit of feeding on the spiderlings of other species, as one researcher observed the species in the nursery web of a Green Lynx Spider, Peucetia viridans, in South Carolina (Willey and Adler, 1989). So far the evidence for predation on spiderlings guarded by the mother spider is apparently "circumstantial," but intriguing and highly suggestive. C. bilineata is, in fact, known to prey on other spiders by attacking the victim from behind (Bradley, 2013) 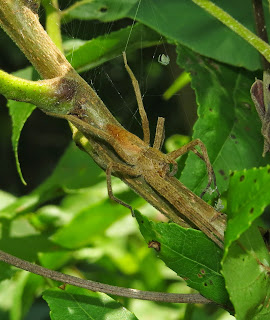 I also find it curious that so many of the "ground spiders" are highly arboreal, more likely to be found clambering about on foliage and twigs, or scaling walls, than to se seen scurrying over the surface of the soil. They are incredibly agile, too.

Cesonia bilineata is a common, widespread spider in the eastern United States from New England south to the Florida panhandle and west to Nebraska. Look for it in wooded habitats. 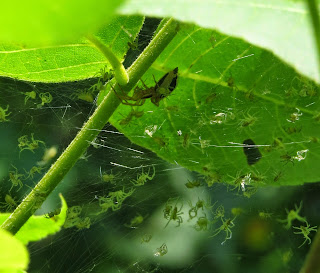