We have had an exceptionally wet, cool spring and summer here along the Front Range; and perhaps it was raining lady beetles, because there are more coccinellids than I have ever seen before. With the lady beetles come their insidious parasite, a wasp in the family Braconidae that goes by the name of Dinocampus coccinellae. 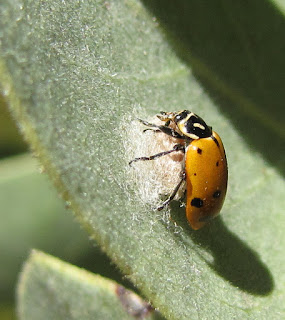 I first encountered the work of these bizarre wasps in southern California. Upon close inspection of a surprisingly inert Convergent Lady Beetle, I found it had beneath it a silken cocoon. I had heard of Dinocampus before, but never seen any life stage in person until then. What scientists have discovered about the species since then is nothing short of mind-blowing. 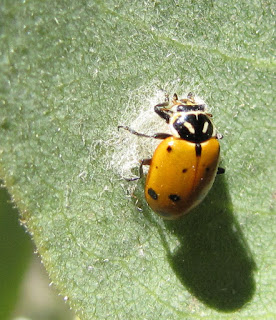 Ok, so the tiny female wasp sneaks up on an unsuspecting beetle and drives a single egg into its body using her spear-like ovipositor. The wasp larva that hatches then begins feeding as an internal parasite of the beetle. It may not kill its host, however. No, what happens is far more weird than that.

An article on the National Geographic website describes a fascinating if not frightening addition to the wasp versus beetle equation. Besides laying an egg in the host, the wasp also deposits a virus. This virus, called D. coccinellae Paralysis Virus (abbreviated "DcPV"), takes up residence in the wasp larva where it replicates.

Once the wasp larva is ready to enter the pupa stage, the virus migrates to the beetle host's nervous system where it has a paralyzing effect. The wasp larva then exits the beetle and spins a silken cocoon beneath it. While the host is helpless to move of its own free will, the virus apparently triggers periodic twitches in the beetle, enough to make it appear capable of attacking any potential parasites of the wasp cocoon. 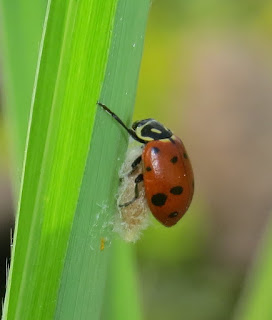 Since lady beetles themselves are well-defended by toxic alkaloid chemicals in their bodies, it is unlikely any predator would attempt to attack the beetle and the wasp cocoon it is guarding. Ironically, a volatile chemical compound given off by lady beetles is what may attract the parasitic wasps to being with.

My wife found one of these beetle-and-cocoon conglomerations on the leaf of a tomato in our community garden plot here in Colorado Springs; and I found another one attached to the blade of an ornamental grass at my workplace, a plant nursery, also in Colorado Springs. Meanwhile, a friend from Facebook, Ryan Nefcy, found his own specimens and committed to rearing out the wasp. 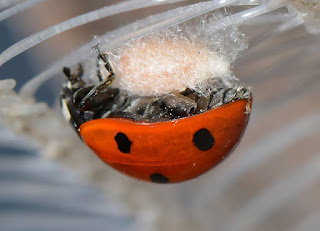 Rayan's stunning pictures of the miniscule wasp are shown here. His images are all the more remarkable considering ".... this thing hatched and it is SO FRICKIN SMALL. And it's moving at 100 mph trying to find a way out of the vial I have it in," as Ryan put it in one of the comments on his Facebook postings. 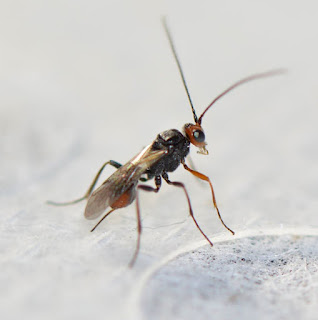 Ryan collected the lady beetle and cocoon on August 12, and the wasp emerged on August 21. The lady beetle host also resumed normal mobility in the aftermath, as about one-third of the victims recover from the whole ordeal. 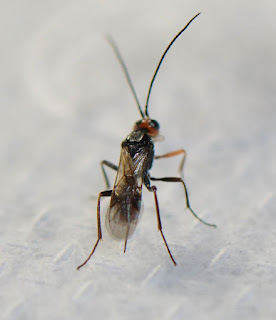 Dinocampus coccinellae is found pretty much worldwide, and is not specific as to which lady beetles it uses as hosts. Presumably, the larger the host the better, but most victims here in the U.S. appear to be either the Convergent Lady Beetle or the introduced (from Europe) Seven-spotted Lady Beetle.

Because lady beetles are important predators of aphids, scale insects, and other pests, there is at least mild concern over the impact of the braconid parasite, especially in agricultural systems that rely on biological control. Female beetles may be preferentially targeted; and the feeding activities of the wasp larva may even sterilize the host, which means that even if a victim recovers, it will be unable to reproduce. 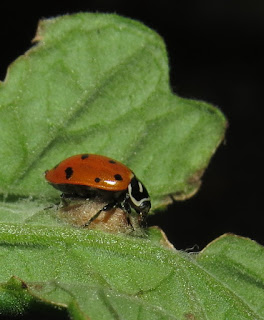 This has been one of the most-studied members of the family Braconidae, and one may find numerous scientific papers in professional journals and online.