Better late than never, allow me to share with you the experiences we had here in Colorado during National Moth Week, July 18-25. I participated in three events here along the Front Range, and all of them exceeded expectations in terms of public participation and excitement over the insects we encountered. While I approached two of these venues about doing Moth Week events, Bell Mead of the Mile High Bug Club carried out all the liaison and organizational work. 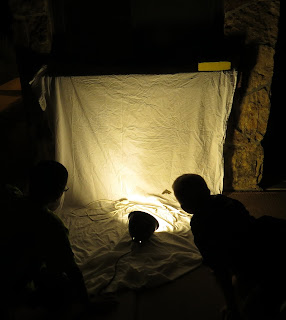 The first event was held at Cheyenne Mountain State Park, located just south of Colorado Springs, on July 18. Park staff arranged for us to set up at the camper services building, hoping to draw campers in the park, but there was enough publicity that people came from elsewhere, too (like "moths to a flame?"). One family even supplied their own lights and sheet. It turns out one of their children raises moths, and dad had to secure interstate permits to legalize the rearing of species not found in Colorado. 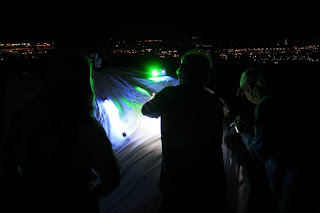 The landscape surrounding the building is mostly grassland, with Gambel's Oak thickets and scattered mixed conifers. This diversity in flora produced a corresponding diversity of moths. Among the more spectacular specimens were a female sphinx moth, Smerinthus ophthalmica, which began laying eggs right on one of the sheets. 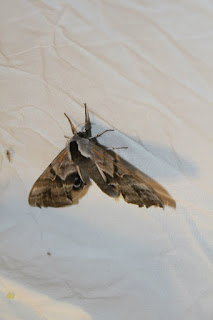 The public portion of this event ended around ten PM, but the Mile High Bug Club folks held an "after party," visiting illuminated outposts such as restrooms, self-pay kiosks, and the visitor center. Moths may be a "gateway drug" to a fascination with other nocturnal arthropods, and indeed we found many interesting beetles, true bugs, scorpions, a large centipede, and two "camel spiders" (non-venomous arachnids in the order Solifugae). 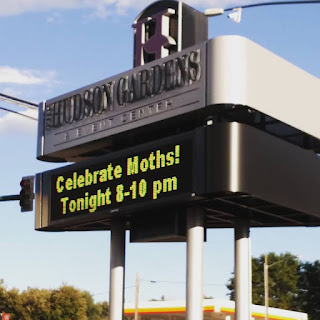 The second event was held Wednesday, July 22 at Hudson Gardens & Event Center in Littleton, Colorado, just outside Denver. Amanda Accamando, the Education and Volunteer Manager there, provided many supplies, creative publicity, and volunteer support. It paid off. We had thirty (30) attendees. 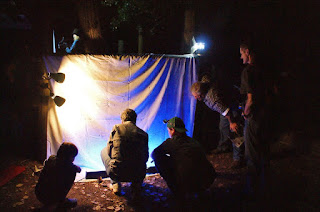 We chose the "Hobbit Hole" as our station, located beside a long pond that we assumed would be a natural flyway for moths. Unfortunately, we were overwhelmed by caddisflies instead. The few moths that did make it to our sheets were interesting species, though, and no one felt the least bit disappointed given the myriad other insects that flew in. 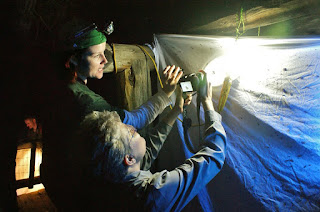 Our finale was a repeat of a private event the Mile High Bug Club held last year in Rock Creek Canyon, southwest of Cheyenne Mountain State Park. Our co-sponsor was the May Natural History Museum, which boasts the world's largest, publicly-accessible private collection of insects and other arthropods. The Golden Eagle Campground and RV Park is also here, affording even more lit-up facilities after dark. 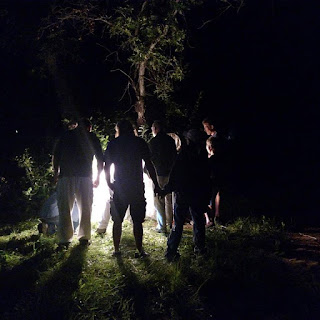 One of the light stations in Rock Creek Canyon © Bell Mead

We were thrilled to have moth guru Sam Johnson on hand to set up his own stations, and help us paint bait on trees. "Sugaring" for moths consists of slathering a thick mixture of fermenting fruit puree, stale beer or other alcoholic beverages, and brown sugar onto tree trunks. Many moths that don't come to lights will come to bait. Glowsticks attached to the trees helped us locate the bait stations after dark. 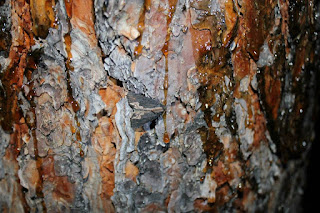 No sooner had the sun gone down on this pine-and-oak forest habitat than in came the moths, plus Ten-lined June Beetles (Polyphylla decimlineata), enormous root borers (Prionus californicus longhorned beetes), and many other insects. Here's a video of part of the fun. This year, the area experienced an outbreak of the Douglas-fir Tussock Moth, Orgyia pseudotsugata, but most were in the cocoon stage, so we weren't inundated. A few males showed up at the lights, but females are wingless and call males to them from their cocoons. 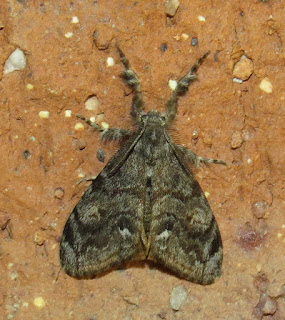 The bait was effective, and drew at least one species of underwing moth, Catocala amestris, that Sam identified as being a new record for southern Colorado. Last year, Same collected Catocala delilah, another unusual species for the region at this same location. 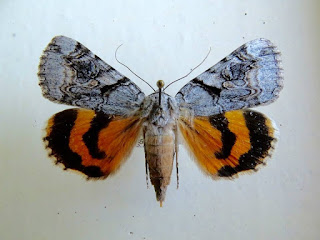 We were so excited by the success of these three events that we held another one, this time at Bell's home near Garden of the Gods Park in Colorado Springs, on August 15. Despite thunderstorms raging around the city, her neighborhood remained mostly rain-free. 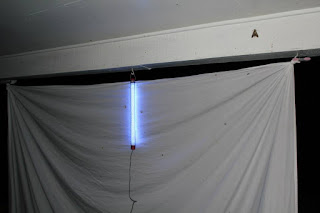 We even took a stroll up to the American Mothers Chapel at the edge of Rock Ledge Range, to see what came to the lights on that little white building. We saw several familiar moth species, but plenty of new ones, too, given the later date. 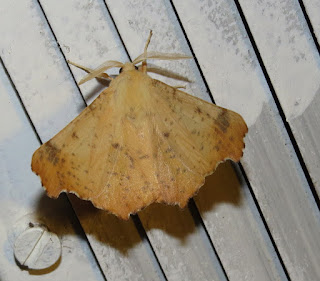 I want to again thank Bell Mead for coordinating with personnel at all the event locations, securing lights and other equipment, and generally organizing everything. Additional thanks to Brian Kelly and Rick Baker of Mile High Bug Club for their assistance, too, and my wife Heidi for enjoying the same odd recreational experiences that I do.

We're already looking forward to National Moth Week, 2016, but we probably won't wait until July to start "mothing." After all, the IO Moth and other big, exciting moths emerge earlier than that.