For several years now, Heidi and I have been making an annual pilgrimage to Emerald Valley, which lies in the northwest corner of Cheyenne Mountain here in El Paso County, Colorado, and at over 7,500 ft. in elevation. Every third or fourth Monday in June, weather and Old Stage Road conditions permitting, we have joined or led the Aiken Audubon Society outing affectionately titled "Blooms, Birds, and Butterflies." They added "bugs" when I came along in 2012. 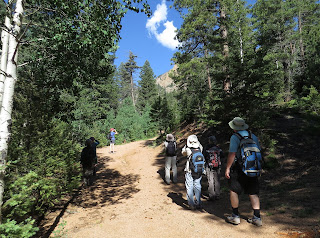 This year we had a total of eleven able hikers and flora and fauna enthusiasts. The forest and meadow scenery alone is worth the trip, with conifers and aspens towering overhead, and wildflowers of every description under foot. 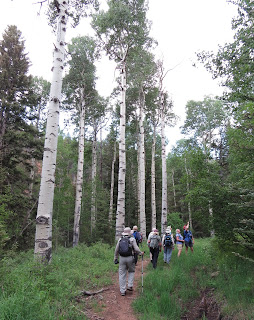 Indeed, one of the major attractions is a trio of orchid species that we seek to count every year as a measure of ecosystem health and vitality. This year, all three species were in veritable profusion. 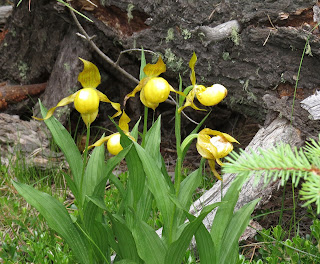 Most spectacular of all are Yellow Lady Slipper orchids, Cypripedium parviflorum. We tallied something like 287 plants, most in bloom, some not. We speculated on what pollinates this spectacular plant, and I had to look up the particulars online. It turns out that bees are attracted to the blooms by color and fragrance, but upon entering the bulbous "shoe" they find no pollen or nectar. The interior of the flower is disorienting, and forces the bee to exit out the back where it either picks up packets of male pollen that adhere to the insect's back, or deposits existing pollen packets to a female receptacle organ, or both. 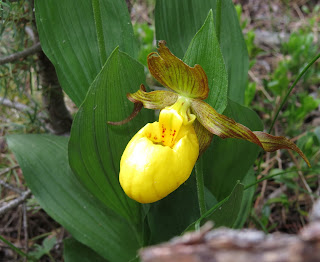 Bees are not terribly dumb, and after a couple exercises in futility they learn to avoid the orchid altogether. Consequently, few plants reproduce each year, but fertilized flowers produce a multitude of seeds to make up the deficit. Seeds germinate successfully only if they land in soil populated by a certain symbiotic fungus. Transplanted orchids are destined to fail in the absence of this fungus. 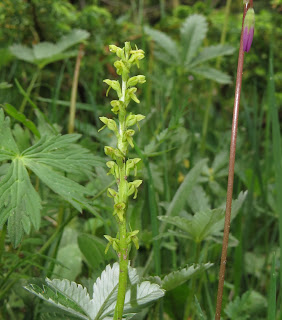 Another common orchid, at least this year, is the Green Bog Orchid, Platanthera aquilonis, which grows almost exclusively along the very edges of streams and in soil prone to flooding or puddling. We tallied roughly fifty or sixty of those, but they are so cryptic that we undoubtedly overlooked dozens more. 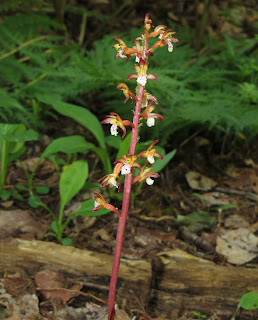 The oddest and most scarce orchid was the Spotted Coralroot, Corallorhiza maculata, a species that favors drier conditions than the other two. It is wholly dependent on microrhizal fungi to provide it nutrients, as it does not perform photosynthesis like most plants do. We found all six or eight specimens associated with conifers, growing beneath them. 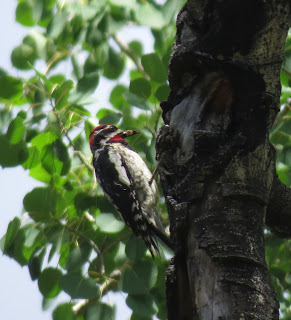 While birds generally remained out of sight on this trip, we heard plenty, including a MacGillivray's Warbler. We did catch glimpses of Dark-eyed Junco, Steller's Jay, Western Tanager, American Robin, Yellow-rumped Warbler, Brown Creeper, and Northern Flicker. We heard Hermit Thrush and plenty of Warbling Vireos and House Wrens. Our favorite sighting was probably a pair of Red-naped Sapsucker woodpeckers, a species we see almost every time we visit Emerald Valley. 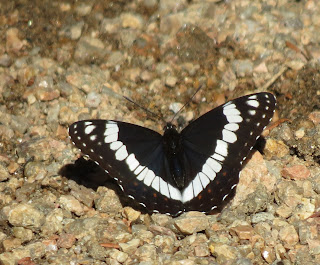 Butterflies were common and diverse. Starting early as we do to avoid the inevitable stormy afternoons, we don't see some species, like Common Ringlet, until late morning or early afternoon. Present from the get-go is Weidemeyer's Admiral, males of which are territorial and ever-present along the road/trail. 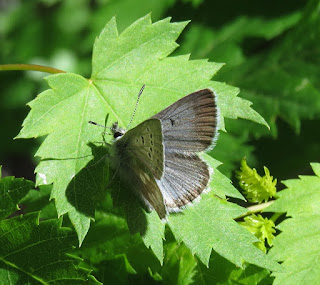 Arctic Blues are having a good year, too, and you can see them on flowers or "puddling" at wet spots along the trail. Early on they bask on foliage, absorbing some solar radiation to help power their flight muscles. 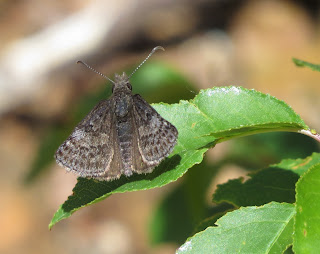 The Dreamy Duskywing, a type of skipper, was a bit of a surprise. They are smaller than many other duskywings, but males perform the same territorial behavior of perching on tall, prominent objects and flying off to chase females or evict rival males. 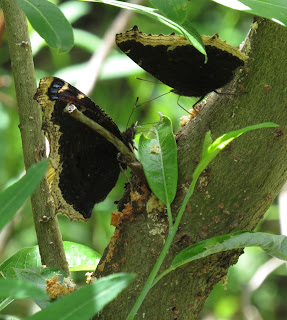 At one point along the trail we came across a willow that was oozing sap from various wounds on its main branches. This attracted a multitude of Mourning Cloak butterflies, and a couple of Hoary Comma butterflies as well. Both species are "anglewings" that overwinter as adult butterflies. 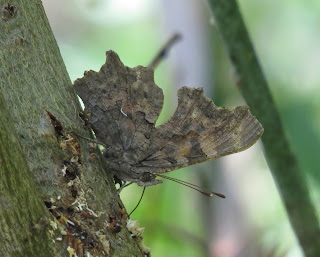 These specimens represented the next generation, though. They were in excellent condition, with vibrant colors and intact wing edges (Hoary Comma has ragged wing edges by definition, though). 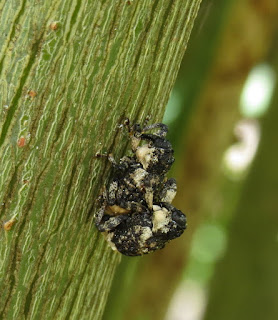 Also on the willow were a pair of mating weevils that I later identified as, no surprise here, Poplar-and-Willow Borer, Cryptorhynchus lapathi. They resemble little lumps of lichen, even individually, so it pays to take a second look when seeking them. The species is actually native to Eurasia, having been introduced here decades ago. 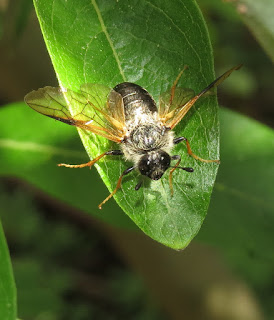 Also on the willow was a large female sawfly, Trichiosoma triangulum, probably looking for a leaf to insert her eggs into. The larvae of sawflies are caterpillar-like vegetarians that feed just like moth or butterfly caterpillars. 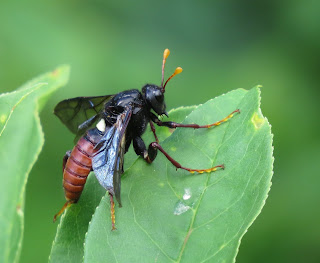 Another member of this same family of sawflies (Cimbicidae), but larger still, is the Elm Sawfly, Cimbex americana. Several hefty males of this species were engaging in aerial duels in a meadow farther back down the trail. These are intimidating wasps, but they do not sting and can be approached closely if you are patient and stealthy. 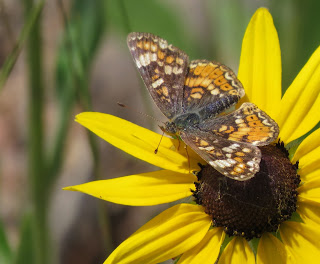 The meadows that punctuate the forest hold a great deal of insect diversity, but rather than make an exhaustive inventory here, I have created a photo album for "Emerald Valley, 2016" on my Flickr photostream.