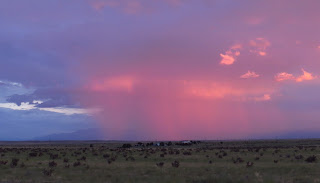 Better late than never, here is how National Moth Week in El Paso, County, Colorado, faired this year. Two events sponsored by Mile High Bug Club were scrubbed due to the record rainfall for the month of July. We did sneak in our kickoff at Chico Basin Ranch on Saturday, July 22, but the potential for dangerous lightning forced cancellation of the July 26 event at Cheyenne Mountain State Park, and the July 29 event in Rock Creek Canyon at the May Museum of Natural History. A misunderstanding with park staff created an "extra" event at Cheyenne Mountain on Tuesday, July 25. 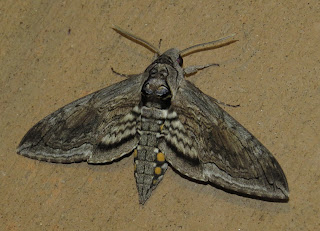 Chico Basin Ranch is a working cattle ranch that sprawls across the El Paso/Pueblo County line for 87,000 acres. Our lights were set up in El Paso County at "Bell Grove," a grove of cottonwoods with a nearby wetland, a true oasis in an otherwise heavily grazed prairie habitat. The chief obstacles between the three stations were cow patties and the odd fallen branch. Bell Mead, Tim Leppek, and Tim and Zach Vogel furnished the blacklights, white lights, and sheets that go into your average night of moth observation. Our club set-ups vary from "McGuyvered" to highly sophisticated. 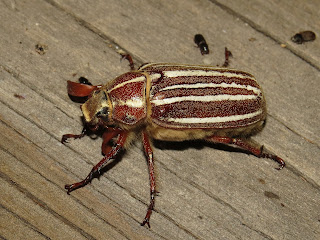 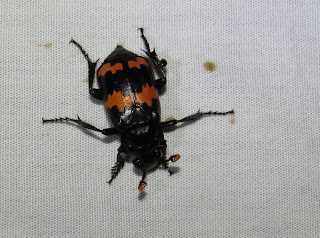 Part of the fascination with "mothing" is seeing what other insects come in. Later in the evening we got predators: damsel bugs, assassin bugs, green lacewings, brown lacewings, a beaded lacewing, mantispids, a real mantis (European Mantis), and spiders. 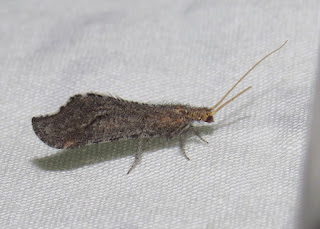 Some of the most attractive and diverse moths were small, like this Garden Tortrix, Clepsis peritana. A member of the leafroller moth family Tortricidae, its caterpillar stage rolls leaves to conceal itself from predators and parasites. 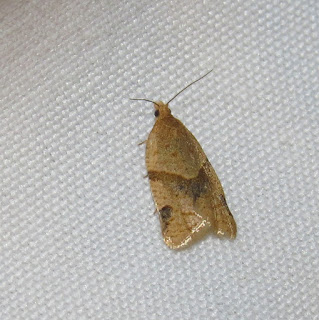 A good number of moths defy identification, but that takes nothing away from their beauty. This is probably another tortricid moth, in the genus Hystrichophora. 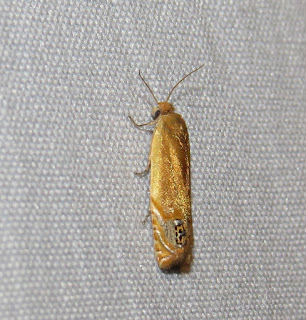 Some moths have shaggy legs, like this Gray Furcula, Furcula cinerea. 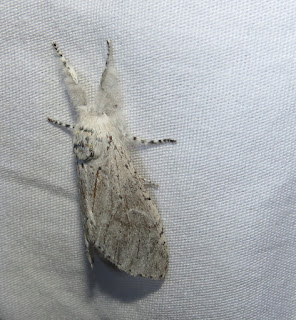 Most moths are designed for camouflage, so away from their usual perches on tree trunks or amid grasses, their subtle beauty is better appreciated. This geometer moth in the genus Digrammia is a great example. 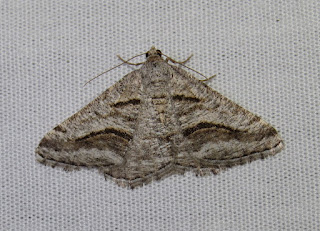 So is this Pero sp., another type of geometer moth. The tiny red speck near its "shoulders" is a mite. We have noticed many moths are carrying a heavier load of mites this year, and wonder what the reason is. The mites feed on the blood (hemolymph) of the moth, much like ticks on a dog. 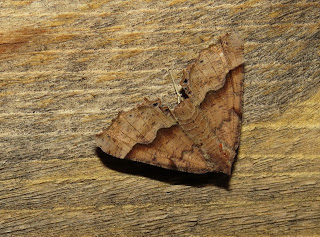 Some moths use a startle defense tactic to complement their camouflage. They have brightly-colored hind wings, normally concealed, which they flash to startle an enemy before they take flight. 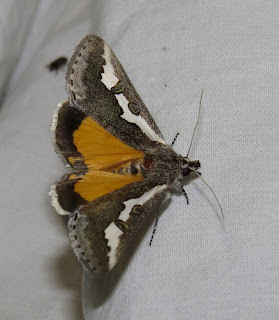 The Purslane Moth, Euscirrhopterus gloveri, a kind of owlet moth, is one example. Another is Drasteria mirifica. 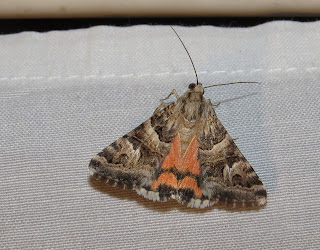 Our July 25 event at Cheyenne Mountain State Park, just south of Colorado Springs and across the street from Fort Carson, was plagued by intermittent rain, but that did not dampen the spirits of the human attendees. We drew several members from the Mile High Bug Club, plus one person who drove all the way from north of Denver. Once the precipitation subsided, moths came in good numbers to our two mercury vapor and blacklight stations, one under the picnic shelter and another under the eaves of a restroom building at the Limekiln trailhead. 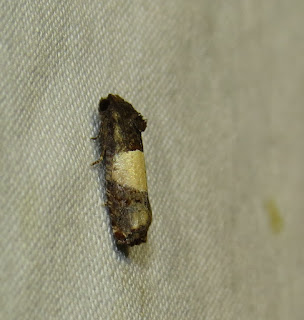 One had to do a double take at some moths, like Epiblema triparitana, passing itself off as a bird turd. Meanwhile, the little Filbertworm moth, Cydia latiferreana, appeared to be drizzled in molten metal. 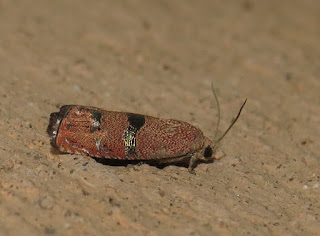 The eutellid moth Paectes abrostolella tends to pose distinctively with its abdomen turned up in the air. 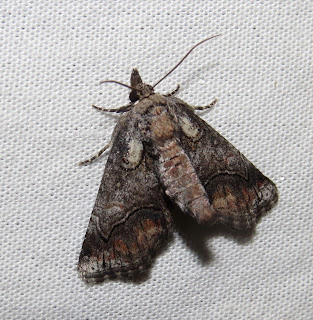 Crashing the party and startling several of us were at least two species of underwing moths, genus Catocala. These giants often stay on the periphery of light stations and may go unnoticed, but these three made a real entrance, flying erratically around the area before settling down. Catocala verilliana was the smaller of the two and C. aholibah likely the larger species. 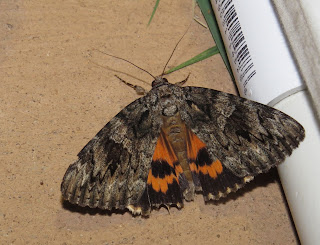 Most moths are maddeningly difficult to identify because of individual variation within the species and overlap in appearance with other species. Cutworm moths in the genus Apamea, family Noctuidae, are a prime example. We think this one is a Yellowheaded Cutowrm, Apamea amputatrix. 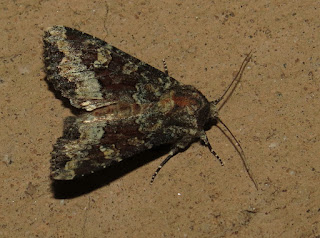 Maybe the most spectacular moth of the night was found resting on a window of the restroom building by Zach Vogel. The Straight-lined Looper moth, Pseudeva purpurigera, is certainly a stunning creature, complete with "mohawk" tufts of scales and hairs on its thorax and abdomen. The "horns" on its face are actually mouthparts called palps. 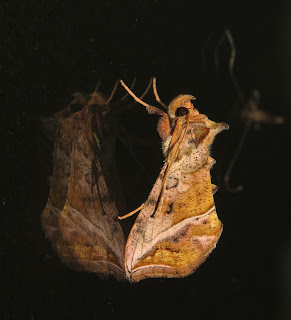 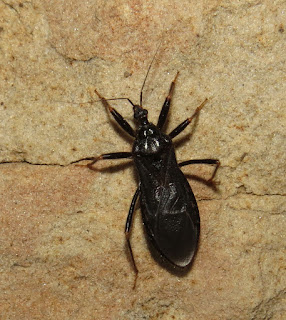 The "after party" was once again rewarding as well, turning up some interesting organisms at the lights around the visitor center and the adjoining parking lot. The biggest surprise was a Plains Spadefoot, a type of toad, strategically huddled beneath a lamp post to catch falling insect prey. 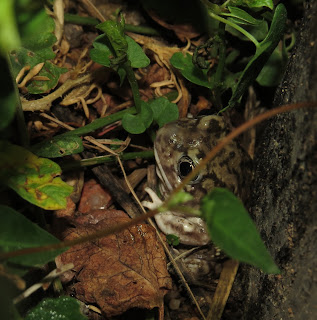 On that post was a short-horned walkingstick, Parabacillus sp. Walkingsticks are not uncommon, but are seldom seen because they are so cryptic. 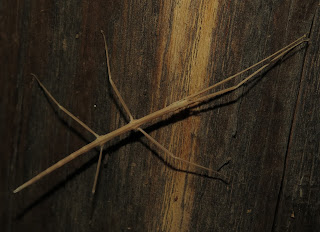 We made our way towards the exits a little after midnight, much like this Banded Sunflower Moth, Cochylis hospes. Here's hoping we can have a full complement of activities during next year's National Moth Week, maybe at some new locations. 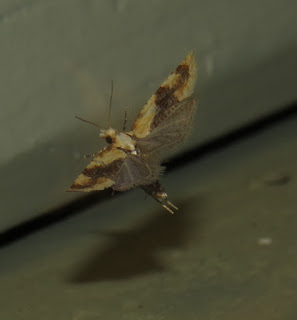