”Why the long face?” is a question that could be asked of some members of the subfamily Agathidinae in the family Braconidae. The narrow, extended face is characteristic of the genera Agathis, Bassus, and Cremnops, helping to make them recognizable in the field (though they can still be confused with other kinds of Ichneumonoidea). 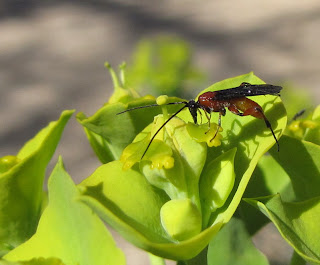 These are also often colorful wasps, clad in red and black, with black or smoky wings. At 6-10 mm, they are small in size, but larger than many other kinds of braconid wasps. They are also frequent visitors to flowers, which sets them apart from most others in the family Braconidae. They make use of those elongated mouthparts to probe for nectar.

The female wasps also hunt caterpillars to lay their eggs in. Typically, one wasp larva develops as an internal parasite of a host caterpillar, though some species are gregarious, several larvae sharing the same caterpillar host. A select few species are occasionally employed as biological control agents. There are 99 species in the subfamily in North America, according to this recent synoptic review of the Agathidinae.

Lots of confusion remains concerning the classification. M. J. Sharkey recently resurrected the genus Lytopylus, splitting it from Bassus, for example. The generic identity of the specimen imaged here, just a few days ago, remains a mystery since I did not collect the specimen, and do not have access to an electron microscope, about the only tool able to render enough detail to facilitate identification at the genus level.

Still, it can be satisfying being able to recognize these insects as braconids in the first place. Most braconids are easily confused with ichneumon wasps of similar size and appearance. 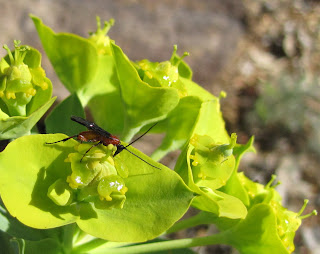 Sources: Marsh, Paul M., Scott R. Shaw, and Robert A. Wharton. 1987. “An Identification Manual for the North American Genera of the Family Braconidae.” Memoirs of the Entomological Society of Washington. Number 13: 98 pp.
Sharkey, M. J. 2004. “Synopsis of the Agathidinae of America North of Mexico,” Proceedings of the Russian Entomological Society. St. Petersburg. Vol. 75(1): 134-152.