People ask me how I became interested in insects in general and wasps in particular. If I answer honestly to the second part of the question, I must admit I probably pursued wasps because no one could call me a sissy for catching something that can fight back. Indeed, I’ve been stung a few times, but not nearly as many as you might imagine. Most wasps are solitary, and females simply don’t have large numbers of helpless eggs, larvae, and pupae to defend. Such is the case with wasps in the genus Tachysphex, family Crabronidae. 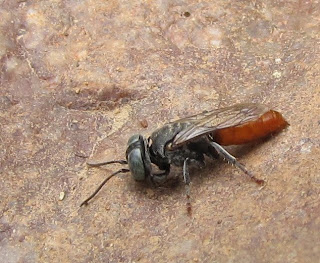 These are diminutive insects, averaging only 6-10 millimeters in length. They sure do pack a lot of energy into that tiny body, though. Watch one and try not to get dizzy. They are so high-strung that you’d swear they drink the wasp equivalent of double-shot espresso. Their quickness is essential to their success at catching prey, fending off parasites, and evading predators.

I was lucky enough to find the specimen above in a state of near torpor, one morning at Wild Outdoor World Arizona. This is basically the only time I’ve seen one sit still. Females are usually going to town digging a burrow or seeking prey. The most accurate records of prey indicate that Tachysphex uses mostly grasshoppers (Acrididae) as hosts, but katydids (Tettigoniidae), crickets (Gryllidae), cockroaches (Blattodea), and mantids (Mantodea) are provisioned by some species. Immature (nymph) stages of those insects are stung into paralysis by the female wasp. She flips the helpless victim onto its back, grabs one of its antennae in her jaws, and cradles it with at least one pair of legs. She will fly her prize back to the nest or haul her heavier cargo overland. 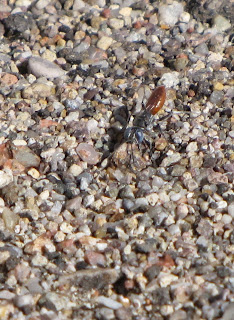 The wasp excavates a shallow burrow in sand or soil before going hunting. The female shown in the remaining images here was being thwarted by the asphalt of the road shoulder she was on. Once she got through the thin layer of fine gravel and other debris, there was that damn pavement….every time!

An underground tunnel dug in a suitable substrate usually includes multiple cells where the prey are stored. One to eight or more victims are placed in each cell depending on their size, a single egg laid on the underside of the thorax of the last one into the tomb.

Among the enemies of Tachysphex are those pesky satellite flies (Sarcophagidae: Miltogramminae), bee flies (Bombyliidae), velvet ants (Mutillidae), and cuckoo wasps (Chrysididae, including Hedychridium). All are parasitic on the larval Tachysphex and/or consume the insect prey provided by the female wasp for her offspring to eat. 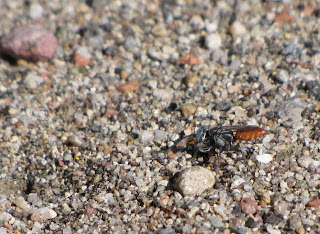 Watch for these tiny little busy-bodies, but don’t expect to find them easily. I have rarely seen them visiting flowers. Mostly, you catch a glimpse of them darting around on the ground, among weedy vegetation in open habitats. There are roughly 43 species in North America, collectively ranging across the entire continent (into the Northwest Territories in at least one case, the Yukon in another). No doubt more species await formal description, or even discovery.