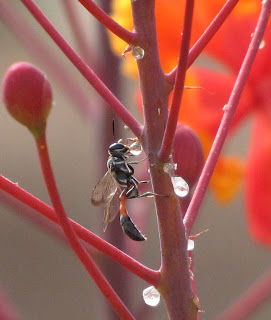 Last week I reported on the “Keyhole Wasp,” Pachodynerus nasidens, but mentioned that there are other kinds of wasps that also go by that common name. Meet the members of the genus Trypoxylon in the family Crabronidae. Most species of these spider-hunting wasps nest in pre-existing cavities, such as old nail holes. They are common, but usually go unnoticed by the casual naturalist.

Trypoxylon wasps can be separated from other wasps by a couple of distinctive characters. The abdomen is long, slender, and clavate (club-shaped, the tip of the abdomen being decidedly blunt). There is only one submarginal cell in the forewing. Lastly, the compound eyes are emarginate, meaning they are obviously “notched” in the middle, on the inner margin. 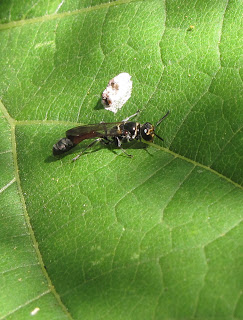 The genus is divided into two subgenera, the small species in the subgenus Trypoxylon, while medium-sized and large species are in the subgenus Trypargilum. Both groups are collectively distributed over most of the North American continent. The only ones I have managed to image in the wild so far are species of Trypargilum. Despite their larger size, they defy identification to species without collection of actual specimens. However, their shared life cycles are similar enough to generalize.

Adult females are solitary, and seek natural cavities in which to nest. This typically means hollow twigs, old beetle borings in dead, standing trees, vacated insect galls, and abandoned nests of mud dauber wasps. Those natural tunnels are progressively partitioned into individual cells along their length as the wasp first provisions the deepest one, then moves forward toward the entrance. 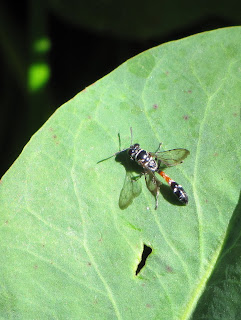 Interestingly, the males often participate in nest maintenance, at the least by actively guarding the nest entrance while the female is away hunting prey or harvesting mud for one of the partitions. This is extremely valuable because the nest is besieged by parasitic insects that would find easy pickings were it not for the male wasp’s devotion to duty. Males do not sting, but they physically block entry of parasites and behave aggressively toward those enemies. Observers have also noted that in some species of Trypoxylon the males may take prey brought in by the female and place it in the cell while she resumes hunting. Males can also assist in cleaning out the cavity before nesting begins, and aiding in the building of partitions and the mud plug closing the finished nest. Naturalist Phil Rau called those species demonstrating couples teamwork “Patriarchate wasps.”

The two species found commonly here in Tucson, T. californicum and T. clavatum clavatum, average from 1-5 cells per nest. Spiders are the prey of these wasps, and mostly immature spiders at that. Some species hunt mostly web-building spiders, while other species seek free-ranging spiders, but there always seems to be at least a slight degree of overlap in prey selection. Jumping spiders, crab spiders, running spiders, lynx spiders, and sac spiders are recorded prey for T. californicum. The same general prey base applies to T. c. clavatum, but also add small wolf spiders and a good selection of orb weavers. Anywhere from 5-20 spiders are stocked in each cell, sometimes more, occasionally less (3 is the recorded minimum, 36 the maximum).

One egg is laid in each cell, and the larva that hatches consumes the cache of paralyzed arachnids. When mature, the larvae spins a cocoon. Apparently, the composition and architecture of the cocoon is species-specific, with varying amounts of silk, saliva, and soil going into the matrix. Inside the cocoon the larva pupates, and an adult wasp eventually emerges.

I would be remiss if I failed to mention that there is one species in North America that breaks all the rules. That would be the “Pipe Organ Mud Dauber,” Trypoxylon politum. This is a very large wasp for the genus, glossy black with white “ankles” on the hind legs, and it constructs large, linear mud nests that resemble the pipes on an old-fashioned organ. This wasp ranges over most of the U.S. east of the Great Plains. You can learn more about it in this excellent archived entry from ”This Week at Hilton Pond” and at Bugguide.net. 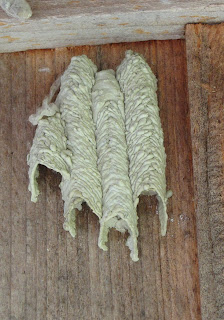 You can create habitat for the cavity-nesters by simply drilling holes in a block of wood and hanging it up under an eave on your home, shed, or barn. One pair of researchers here in Tucson used a ¼ inch bit drilled to a depth of 77 millimeters, and a 3/16th inch bit drilled to 124 millimeters, with good success. A good primer on how to build such “trap nests” can be found here. Give it a try! 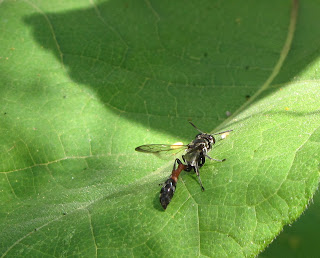 Sources: Matthews, R.W. and J.R. 1968. “A note on Trypargilum arizonense in trap nests from Arizona, with a review of prey preferences and cocoon structure in the genus.” Psyche 75: 285-293 (available online as a PDF. T. arizonense is an outdated name for T. californicum).
Bohart, R.M. and A.S. Menke. 1976. Sphecid Wasps of the World. Berkeley: University of California Press. 695 pp.