I was wrong. I have to admit that a lot in my entomological world. I think I know what something is and I am incorrect. When I came across this sleek female ichneumon wasp I assumed it was probably a species of Rhyssa given the size, shape, and behavior (climbing around on the trunk of a tree). Turns out it is actually a specimen of Podoschistus vittifrons. 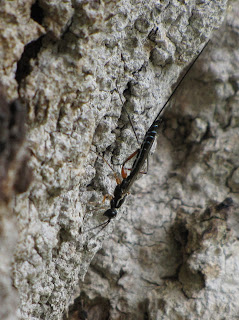 I always have other people to thank for helping me see the error of my ways, and this time the credit goes to Bob Carlson, a world-class authority on ichneumonids of North America. My image is not the greatest, but still he was able to discern the identity of the wasp.

Ok, so there is only one North American representative in the genus Podoschistus, but….The classification of ichneumons has changed numerous times, and no doubt will continue to be modified in the future. This particular wasp was formerly placed in the genera Xorides and Neoxorides. It is a member of the small subfamily Poemeniinae, and is known to be ectoparasitic on the larvae of wood-boring beetles.

Apparently, P. vittifrons is not commonly encountered in the forest habitats it frequents. This specimen was imaged near the foot of Mount Sugarloaf in South Deerfield, Massachusetts. There are remnant woodlands there, but the majority of the surrounding landscape is farmland and more-or-less suburban housing. Recorded hosts for its larvae are the grubs of Dicerca divaricata (family Buprestidae) and Graphisurus fasciatus (family Cerambycidae). Left alone to mature into an adult beetle, G. fasciatus looks like this: 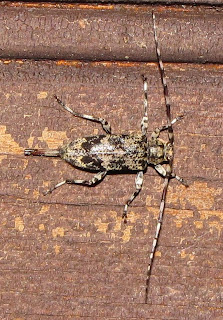 The female wasp somehow “divines” the presence of a beetle grub boring in the bole, then inserts her long, needle-like ovipositor through the wood to reach the grub and lay an egg upon it. The wasp larva that hatches then slowly consumes the beetle grub.

Those who are interested in a more detailed diagnosis of the Poemeniinae will find this web page exceedingly detailed and useful. Illustrated keys to subfamilies of world Ichneumonidae can be found in Hymenoptera of the World: An identification guide to families edited by Henri Goulet and John T. Hauber (Agriculture Canada, 1993).

Ichneumons in general provide enough diversity in appearance and habits to last one a lifetime of study should he or she be so inclined. There is certainly much more to learn about them, their geographic distribution, and their hosts.