Prowling around outdoor lights at night to look for insects can be fraught with difficulty, especially in a small town. The first time I went out to investigate the lights of South Deerfield, Massachusetts, I was confronted by the local constabulary. Hey, can I help it if the best-lit buildings are banks and the U.S. Post Office? I cleared a background check and was rewarded in the long run by encounters with many six-legged personalities, including this ichneumon wasp in the genus Colpotrochia on June 23, 2009. Oh, by the way, I found it by the lights on the police station. 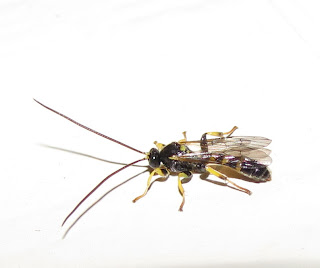 The genus Colpotrochia is placed in the subfamily Metopiinae, the members of which all lay eggs in the host larva, emerging as adult wasps from the host pupa. According to the Database of Hymenoptera in America North of Mexico there are four North American species in the genus, all ranging from the Atlantic coast to barely west of the Mississippi River. Two of those are known in Massachusetts: C. crassipes and C. trifasciata. These are not very large insects, averaging between six and ten millimeters in body length.

Gardeners will be delighted to learn that the female wasps use their very short ovipositor to lay eggs in caterpillars, especially leafrollers in the family Tortricidae. The wasp grub that hatches inside the caterpillar slowly consumes its host, avoiding disruption of the caterpillar’s life cycle until after it pupates. Instead of a moth emerging from the pupa, out comes a wasp.

Those interested in identifying ichneumons to the subfamily level (no mean feat) might start with this PDF file, an Identification Key to the Subfamilies of Ichneumonidae, by Gavin Broad. It provides a very good start for learning how to tell ichneumons from braconids, and other basic information, all well-illustrated.

Special thanks goes to Bob Carlson for identifying my image after I posted it to BugGuide.