According to my friend Margarethe Brummermann, this has been the year for cicada killer wasps in southern Arizona. I have spent much of my summer traveling to other parts of the U.S. though, so I’ve missed a lot of the action around Tucson. Plus, cicada killer abundance tends to be very localized. Couple this with the spring drought and the fact that I live in the city itself where there is little greenspace, and it is no wonder I have seen few insects. However, a visit to Tohono Chul Park back on June 17 did allow me a glimpse of a female Western Cicada Killer, Sphecius grandis. 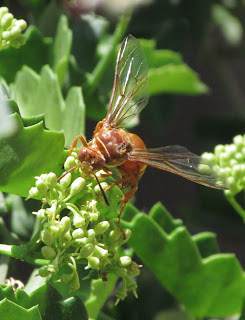 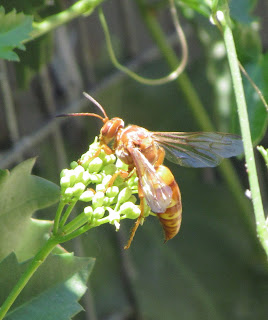 The only truly reliable means of discerning the two species is by the punctation of the first two abdominal segments, as illustrated in the online key to cicada killers by Charles Holliday. This requires extremely close examination of the wasp, though, and a live specimen won’t hold still for that.

Sphecius grandis ranges throughout much of the western United States, from Kansas and Nebraska south to Texas and west through Nevada to California, Idaho, Oregon, and southeast Washington. I am hoping that I can find this species in Colorado next summer.

Like the majority of cicada killer species, the Western Cicada Killer likes to nest near other members of its kind. This was graphically demonstrated to me last summer when John Rhodes of the Sonoran Arthropod Studies Institute invited me to his neighborhood where a number of S. grandis were nesting in the bank of a dry wash. Ironically, the date was June 17, 2010, exactly one year to the day prior to my next sighting at Tohono Chul. John’s place sits in the lower foothills of the Santa Catalina Mountains and the male “Cactus Dodger” cicadas, Cacama valvata, were singing loudly from seemingly every branch of mesquite and palo verde trees.

The one thing the cicadas could not dodge were the cicada killers. Just standing in the wash and looking up and down it I could see female wasps flying in with their prey. It is a jaw-dropping sight to see a large wasp, carrying an equally large prey insect, droning along like it has no burden at all. That would be like you or I running full speed while carrying a sofa. 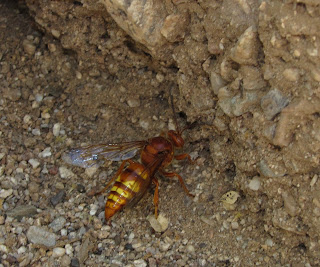 The wasp has perhaps her greatest challenge in shoveling her prize through the entrance to her burrow. Once inside she will cart the cicada, paralyzed but alive, into a previously-prepared cell near the bottom of the tunnel. This will be the cicada’s death chamber, as it is destined to become food for one of the female wasp’s larval offspring. She will cache one or two cicadas in each of the several underground cells before sealing the entire burrow and beginning a new nest.

Cicada killers do visit flowers to refuel on nectar, but they are not commonly seen on blossoms. They will also sip sap oozing from wounded trees and shrubs. Male cicada killers are territorial, and will perch where they can oversee a nesting aggregation of females. They aggressively challenge all intruders but, since they have no stingers, it is all bark and no bite.

Enjoy watching these wasps if you have them on your property. Their nesting activity lasts at most about a month, and as long as you don’t walk barefoot through the area they occupy, risking stepping on a female wasp, you need not fear.