One of the spiders most frequently encountered in basements, garages, and cellars over much of North America is the Triangulate Cobweb Spider, Steatoda triangulosa. It is a member of the cobweb weaver family Theridiidae, and therefore related to black widows. Not surprisingly, it is sometimes mistaken for a widow. 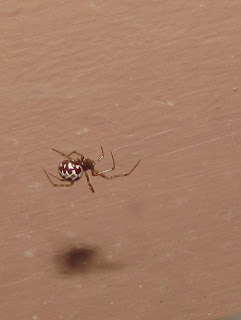 This species is widely distributed in the U.S., from Massachusetts to Nebraska, Colorado, Utah, Oregon, and California, and all points south (though nearly absent in the southwest and in Florida). It is also recorded from southern Ontario, Canada. It is also known from central and southern Europe, the Mediterranean region, and what was formerly southern Russia. Indeed, it is suspected that S. triangulosa was introduced to North America from overseas.

Adult females are only 3.6-5.9 millimeters in body length, males even smaller at 3.5-4.7 millimeters. Both genders usually sport the same distinctive pattern on the abdomen: a background color of dirty white or beige with a pair of bold, wavy, rusty or purplish brown lines down the back. The cephalothorax is normally dark reddish brown, and the legs pale brown or yellowish with dark bands at the joints. Males have a more slender, leggy appearance than females. 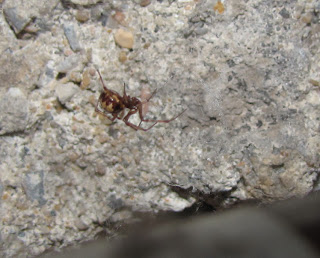 The Triangulate Cobweb Weaver spins an irregular, tangled web with a more-or-less sheet-like central platform. It seems to prefer dark recesses where it can dash into a crevice if disturbed. Look for them in your basement, cellar, garage, water meter box, or under bridges and in culverts, where the entire web may be protected from the elements. The spider hangs upside down in its web.

Mating occurs from late spring through early autumn. Females deposit about thirty eggs at a time, wrapping them in an opaque, white, spherical sac. The eggs may be seen through the sheer fabric enclosing them. A female may produce six or more egg sacs in her lifetime.

This species preys on a variety of insects, including the Red Imported Fire Ant (“RIFA”) in the southern U.S. Unfortunately, it is an unlikely candidate as a biological control agent of that pest (MacKay and Vinson, 1989). This is apparently a spider that “plays well with others,” as it may build its web in relatively close proximity to the webs of other cobweb weavers, cellar spiders, and even brown recluse spiders.

Don’t be alarmed by the presence of this species. It is not recognized as being dangerously venomous to people or pets. Indeed, it is such a small spider that its bite is unlikely to puncture human skin anyway 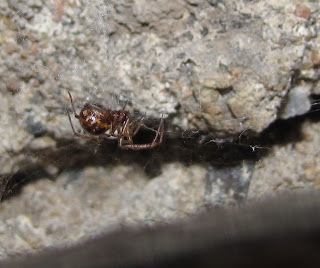