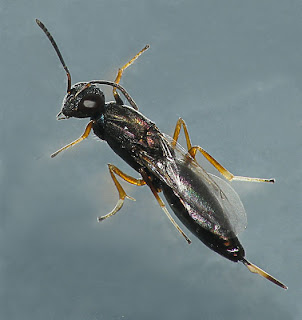 The overwhelming majority of wasps are stingless insects that are very small, and usually parasitic on other insects at some point in their life cycle. Chalcidoidea is a “superfamily” that includes a great many families of tiny parasitic wasps. Among these are wasps in the family Eupelmidae. There are roughly 935 species known globally, 119 of those occurring in North America north of Mexico (Grissell, 2010). 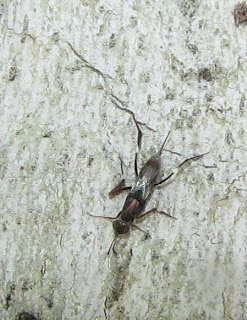 The different subfamilies and genera have disparate life histories as internal or external parasites of arthropods as diverse as scale insects, cockroaches, lacewings, gall midges, moth and butterfly caterpillars, and other wasps. Some are egg parasites of various insects, or spiders. Some are parasitic on gall-forming insects or stem- and twig-borers. Others are hyperparasites: parasites of other parasitic insects already present in a host insect. Most species overwinter as mature larvae, or pupae. 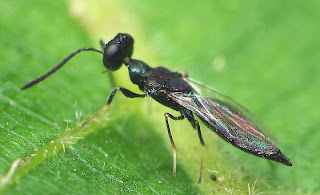 An interesting aspect of the subfamily Eupelminae is their ability to jump….with their middle legs. The segments and musculature of the mesothorax (middle thoracic segment) are designed to give great power to the middle pair of legs, propelling the insect quickly away from a potential predator. The build-up of tension is so great that it deforms the thorax prior to the insect launching itself. Note that the middle leg also has a well-developed spur on the terminal tip of the tibia, the better to anchor a jump (Pitkin, 2004). The wasps die in a contorted posture as a result of the shrinkage of those mesothoracic muscles (image below). 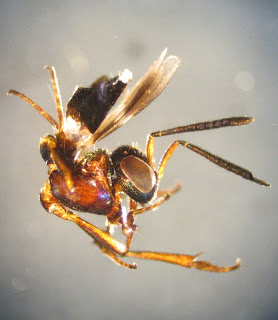 At about six millimeters in body length, members of the genus Metapelma are enormous by the standards of chalcidoid wasps, and you might actually encounter them in the field. They are parasitic on wood-boring insects, probably the beetle families Buprestidae and Cerambycidae. Look for them on tree trunks with exposed dead wood. 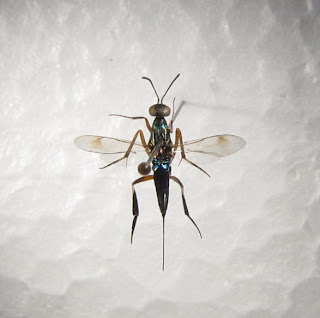 Most other eupelmids can only be observed by rearing parasitized host insects. Harvesting galls may yield them, along with a variety of other parasitic wasps. There is great potential for learning more about the relationship of eupelmids to their hosts; and there is also the possibility that more species could be employed as biological controls of agricultural and forest pests.