Spider wasps are already active over much of North America. Here on the Front Range in Colorado Springs, Colorado, the genus that is out now is Anoplius. A visit to the Starsmore Discovery Center at the entrance to North Cheyenne Cañon Park produced three specimens in a small area. I patiently followed one as she dug her burrow. 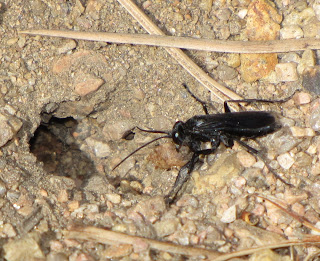 Unfortunately, most spider wasps in the family Pompilidae are wholly blue-black in color, with few features one can distinguish in the field, or even from images of live specimens. Only years of experience has me the least bit confident in concluding a genus for these Colorado specimens. I did note that the outer edge of the hind tibiae (“shins”) on these wasps are smooth, which pretty much rules out any spider wasp in the subfamily Pepsinae. Since she was digging her own burrow and not invading that of another wasp, I can rule out the subfamily Ceropalinae (cuckoo spider wasps are also vividly marked). 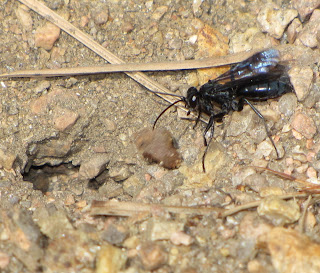 There are five subgenera within the genus Anoplius. Roughly 26 species occur in Colorado. The majority of them are black, and 10-20 millimeters in body length. The one depicted here was about 12 millimeters.

Interestingly, this particular female wasp appeared to be digging three or four burrows simultaneously. Whether she would ultimately choose one to finish, or complete all of them, remains a mystery to me. The soil was full of pebbles, so perhaps she was seeking the path of least resistance. Even so, she unearthed several pebbles that to her must have been like boulders. The persistence, strength, and agility of these insects is amazing. They appear tireless, pausing only periodically to groom soil particles from their eyes and antennae. 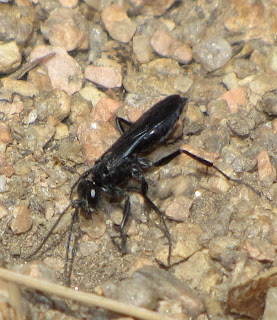 It is difficult to generalize about Anoplius because of their diversity in habits. Most species prey on wolf spiders (family Lycosidae), either exclusively or in part. A few are generalists, catching mostly other kinds of wandering spiders. Prey records include crab spiders (Thomisidae), jumping spiders (Salticidae), ground spiders (Clubionidae, Corinnidae, and Gnaphosidae), and grass spiders (Agelenidae).

The female wasp stings its prey into paralysis, then excavates a burrow or transports the spider to a burrow she dug previously (or a pre-existing cavity). An egg is laid on the victim and then the burrow is closed. This process is repeated as often as the wasp is able.

We are still learning the biology of most Anoplius species, so observations you document could represent something new to science. Collecting specimens is helpful in this case, where the wasps cannot be reliably identified without voucher specimens. It is also perfectly permissible to simply enjoy watching these wasps without taking notes or images. 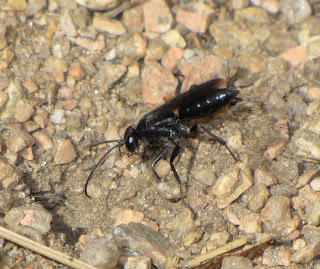