Jumping spiders (family Salticidae) are just about as “cute” as spiders can get. They are usually fuzzy, often flamboyantly colorful, and have one pair of their eight eyes greatly enlarged and forward-facing. They are alert to your approach and turn to face you. Adorable. Just the same, I have found them exceedingly difficult to photograph. Recently, I finally got a cooperative subject in the form of a lovely female Phidippus asotus. 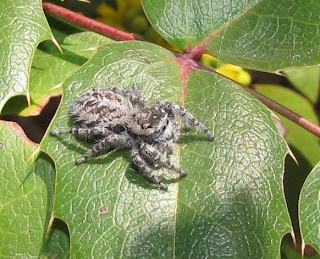 My partner in spider sleuthing, Mandy Howe of Spiders.us, helped me identify the spider’s species and gender. P. asotus is known to occur from California east through northern Utah and Colorado, and south to extreme west Texas and northern Mexico. The male is the more colorful of the sexes, most specimens being a pale orange in color. Both genders average around seven millimeters in body length. 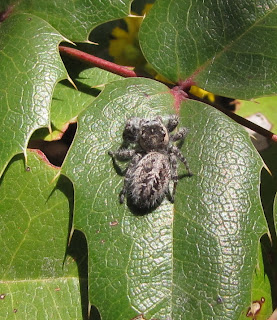 This species typically favors fairly high elevations, between 5,000 and 7,000 feet. Indeed, Colorado Springs sits at a little over 6,000 feet. I spotted this specimen off the Rock Island Trail, sitting on a leaf of Oregon Grape. I initially thought she was just basking in the warm sun, but it turns out she had another agenda….

I had been taking a few images of a Yellow Dung Fly, Scathophaga stercoraria (below), that was enjoying the nectar of the Oregon Grape flowers. I suddenly noticed the spider sitting on the leaf of another plant adjacent to the one with the fly. Well, the fly had not escaped the spider’s notice, and she was actively stalking it. 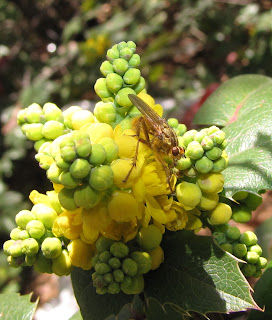 To say that jumping spiders are stealthy hunters is an understatement. The spider was beneath the fly, so she hopped over to the flower stalk but stayed beneath and out of sight of her quarry. The fly must have eventually seen or sensed the predator, for it suddenly flew off (much to the spider’s disappointment, I presume). I could almost hear the spider sigh in regret. 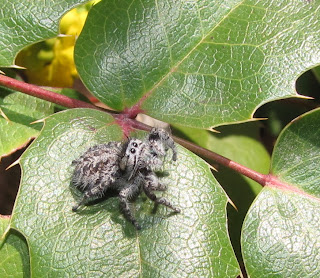 My information on this species says that P. asotus matures in the fall, but this was an adult female. She probably overwintered somewhere snug and cozy. They prowl for prey on oak, juniper, and various shrubs.

There are a total of ten species of Phidippus that likely range in the Pikes Peak region, so I look forward to finding the other nine. Keep an eye out for this genus in your own backyard. Despite their relatively large size and engaging personalities, these spiders are not that well known. 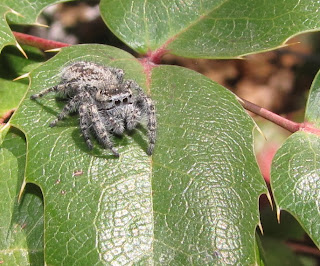