Most of the orb weaver spiders that you see at this time of year are enormous mature females that sit in the center of their webs. Not all members of the family Araneidae are so large, however. A case in point is a species that I found right outside the back door of the house we rented in Cape May, New Jersey earlier this month. 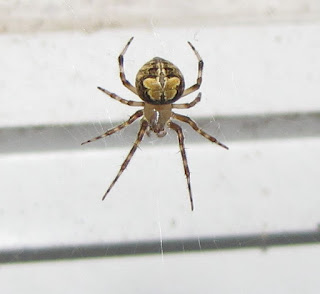 I noticed one of these spiders during the day, huddled in a depression in the eave of the house, next to an egg sac. I took a picture and noticed the ornate, butterfly-shaped pattern on the spider’s abdomen. Once I returned home I was not surprised to find the common name of the species to be the “Butterfly Orbweaver,” Araneus pegnia. Older references use the name Neosconella pegnia.

The “butterfly” can be pinkish or gray or brown or yellowish, varying from specimen to specimen. The entire spider, even as an adult, is not very big. Mature females are only 3.5-8.2 millimeters, and males like the one below are even smaller, 2.5-5 millimeters. 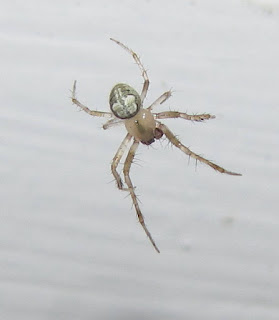 I found that this species is most active at night. At least three specimens, two females and one male, made their living around the back porch light, where many small insects were attracted each evening. The odds of catching prey were obviously increased given this situation. I could never clearly discern the structure of the webs, or whether they were even complete, but references suggest the orbs are at least sometimes incomplete anyway. The circular snare may be missing a sector, with a bundle of signal threads running up to the spider’s retreat on the perimeter. The orb may also be complemented by a network of irregular threads similar to those of labyrinth orbweavers. I did find one female sitting in the hub (center) of her web on one evening, as depicted in the image at the top of this post. Another female was busy creating her web (below). 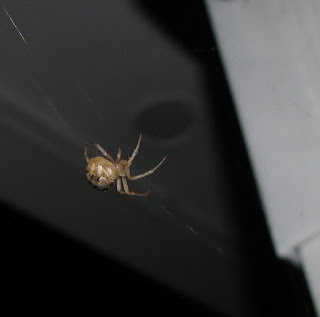 The lone male I found (image above) was literally hanging out, but perhaps his duty was done. One of the females was already protecting an egg sac. The ova appeared to be obvious, as a ball covered by several layers of opaque silk. 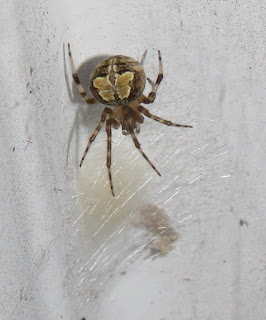 Many of the female’s offspring will not survive to maturity, or at least not live until the first hard frost that kills most late-season orb weavers. The Butterfly Orbweaver is apparently a favorite prey item for the Black and Yellow Mud Dauber wasp, Sceliphron caementarium. The victimized spiders are paralyzed by the wasp’s sting and stuffed into a mud cell as food for a single mud dauber larva.

Araneus pegnia is a far-ranging species. It occurs from at least as far north as Massachusetts, south and west to Ohio and Indiana, the Atlantic and Gulf Coast states, and southern Arizona and California. It is perhaps most common in the southeastern U.S. Outside of the U.S. it ranges to Ecuador in South America. It is also found in the Bahamas, Cuba, and Jamaica. The preferred habitat seems to be in wet areas (bogs in Massachusetts, a river bottom in Costa Rica, for example). 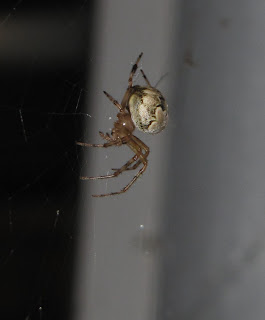 It is certainly easy to dismiss these diminutive spiders as simply immature versions of a larger species, so pay close attention when spider hunting. Autumn is the perfect time to find many kinds of orb weavers, as the leaves fall and their webs are more exposed; and most species have reached maturity.