Large wolf spiders (family Lycosidae) are normally difficult to spot, given their habit of prowling on the ground amid tangles of grasses and other vegetation. Imagine my surprise, then, to find one stretched out on grass stems about three feet off the ground. I recognized it as a normally ground-dwelling member of the genus Rabidosa, and I think I know what it was doing up there. 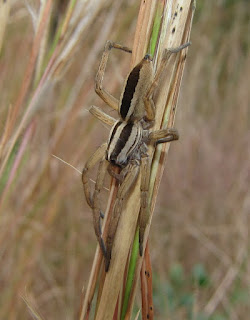 There are five species in the genus Rabidosa that occur in North America, and I was pretty sure it wasn’t the common “Rabid Wolf Spider,” Rabidosa rabida. It was mature, but not that large, and it lacked the pale spots inside the margin of the dark chocolate stripe down the abdomen. Twisting the grasses for a better picture caused it to reveal its underside, and then I remembered that the underside of the abdomen also has a diagnostic pattern of black spots or blotches. 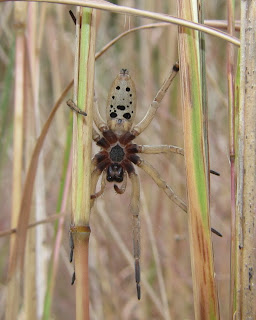 Once I got home, I discovered the spider was a mature female “Dotted Wolf Spider,” Rabidosa punctulata. This particular individual was found at the edge of an open agricultural field in an otherwise wooded area in the Higbee Beach Wildlife Management Area, Cape May, New Jersey, on October 4, 2012. The species ranges from Massachusetts and southern Michigan, south to northern Florida, southeast Kansas, and eastern Oklahoma and Texas.

Mature female Dotted Wolf Spiders measure an average of 15.2 millimeters in body length, while males are about 12.8 millimeters. Adults, at least females, mature between June and October. Mature males appear in early September, but are thought to mature earlier in the year. The male follows the pheromone-impregnated draglines of females.

Recent research has revealed that males of R. punctulata have two alternative mating strategies. Large specimens in good physical condition simply overpower a potential mate, grappling with her until she submits to copulation. I know, that sounds a lot like rape to me, too! Smaller males, or those in poorer condition, go through full courtship displays that involve leg-waving, and stridulation with the pedipalps that cause rhythmic vibrations picked up by the female being courted (see this website). 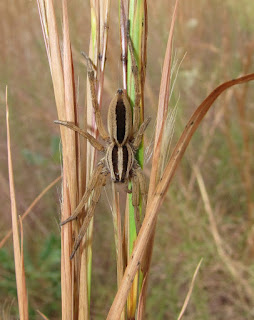 Mated females take three or more hours to create an egg sac that they attach to their spinnerets, allowing them to continue a nomadic lifestyle. She probably totes her brood this way for about a month. The spiderlings that emerge then pile atop the female’s abdomen, latching onto knob-tipped hairs where they ride until their next molt (roughly three weeks later, extrapolating from data on R. rabida). I could find no reference to exactly when females carry their egg sacs, but presumably it is in late autumn, the spiderlings overwintering in protected places.

These spiders prey on a variety of insects, including small grasshoppers, but may scavenge dead insects as well. Most references indicate that this species is a nocturnal hunter, and mostly waits in ambush for an insect to wander within pouncing range. They may also run down their prey. Prey is seized with the legs, helped by sticky brushes of hairs on their legs. The spider may loosely wrap its prey in silk to help secure it from falling to the ground if the spider is resting on vegetation.

So, what was my spider doing, up a tree in essence, without prey? Avoiding becoming prey itself is my theory. I also observed a large spider wasp, Anoplius aethiops or A. cleora, scouring the ground for potential wolf spider prey in the vicinity of this spider. I suspect the spider beat a hasty retreat out of reach of the typical search zone for the wasp. 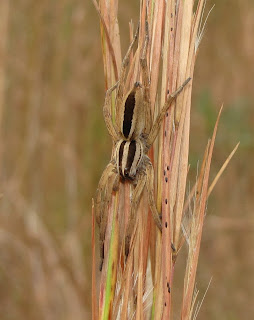 Note: This species was formerly known as Lycosa punctulata, and older references will use that name. It has since been determined that Lycosa is an Old World genus with no species in North America.