Wasp Wednesday: Wasps in a Bubble

One of the strangest inquiries I have ever received was the image below, from a Facebook friend named James Adams. He took the picture at the Rio Santiago Nature Lodge near Santa Ana, Honduras (northern coast). Not familiar with the tropical fauna there, I forwarded the image to Dr. James Carpenter at the American Museum of Natural History in New York City. Dr. Carpenter is a world authority on social wasps with much experience in the neotropics. 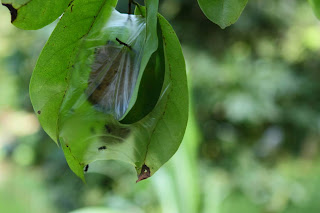 ”OK so this is one of the weirdest things I've seen in nature. These small, black wasps created a normal-looking nest amidst leaves of a soursop tree. Then either they, or some other creature, encased the entire thing in this "plastic" bubble. Great protection from the rain, but WTH ????? There's a little oval-shaped hole in the bottom so they can get in and out. Anyone like Court Whelan or Deborah Matthews know what these wasps are called? Crazy! Rio Santiago Nature Resort, Honduras —“

Dr. Carpenter wrote the following in response to my query:

"It's a nest made by a species of Protopolybia. There are several species in the Amazon that make envelopes of "wax paper," such as chartergoides - you may encounter descriptions in the literature under the generic name Pseudochartergus. The paper that paper wasps make is most commonly wood fiber bound with saliva - these critters have just left out the wood."

The other comments on the original Facebook post of this image were delightful. Piotr Naskrecki, an extremely experienced explorer in his own right, said “Absolutely amazing, I have never seen anything like this.” Holly Overmyer was jealous: “I wish I could make a little plastic bubble when I get caught in the rain.” John Afdem quipped: “I'm just guessing here, but perhaps its one of the Saranwrapipedes???” Kenneth Barnett, not to be outdone, replied “John, you must talking about Polyrapus opaqous?”

James Adams runs The Lodge at Pico Bonito, La Ceiba, Atlantida, Honduras. I just may have to visit both nature lodges to see this kind of phenomenon for myself.