The western states may have the giant “tarantula hawks,” but most of the U.S. and adjacent Canada has another fierce spider wasp in the family Pompilidae. On our trip to Cape May, New Jersey, September 30-October 5, we encountered several big females of Anoplius aethiops. Ok, they were most likely that species, but it requires microscopic examination to separate them from the similar Anoplius cleora. 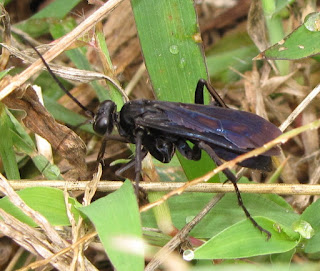 The first one I saw was so large that I at first mistook it for a Great Black Wasp, a wasp in an entirely different family. Both wasps are large, jet black, with black wings that reflect blue or violet. The spider wasps do not, however, have the abdomen separated from the thorax by a thin petiole (stalk). When I got a side view of the wasp, it became clear it was not in the genus Sphex. Still, it goes to show how difficult it is to identify insects in the field.

Female Anoplius aethiops measure 13-23 millimeters in body length, males 9-18 millimeters. Though black in color, their bodies reflect a hint of bluish or purplish color in the right light. 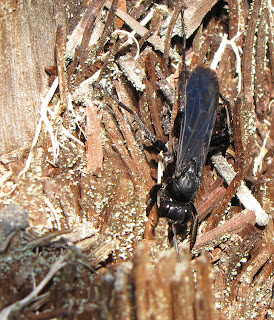 My “Spider Sunday” post was about a species of large wolf spider, the kind that these big spider wasps target. Each female Anoplius aethiops digs her own burrow, usually originating inside an existing burrow or crevice, and then goes off to find a spider to stash inside the tunnel. Heidi and I encountered one female wasp toting a good-sized wolf spider down the path we were on in Cape May Point State Park.

The wasp was walking backwards quite rapidly, while using her jaws to hoist her heavy prey completely off the ground. This feat of strength would be like you or me lifting a recliner with our teeth and backing across the street. 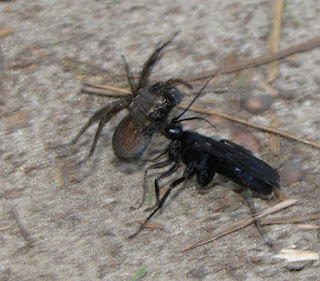 The spider is not even dead, but only paralyzed by the wasp’s venom when she stung it in a nerve center. Unfortunately, even in my rather careful efforts to get more images of wasp and spider, she ended up abandoning her prize. An abandoned, paralyzed spider may or may not eventually “come to” from its comatose state.

All known host spiders for Anoplius aethiops are lycosid wolf spiders: Hogna helluo, H. carolinensis, H. aspersa, H. baltimoriana, H. frondicola, Rabidosa santrita, Gladicosa gulosa, and Schizocosa ocreata. Once she places a spider in the bottom of her underground nest, the wasp lays a single egg on the spider, exits, and then closes the burrow. She will repeat the process as long as she is able. This is a wasp most common in late summer, and persisting into late fall. Most of the specimens we saw in New Jersey had tattered wings, indicating they had been active for quite some time already. 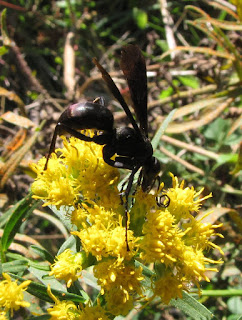 Look for Anoplius aethiops in open areas like fields, forest edges, meadows, and prairies. It tends to be replaced by A. cleora in open sand dune habitats. Both genders visit flowers such as wild carrot, goldenrod, sweet clover, milkweed, and throughwort for nectar. Anoplius cleora rarely visits flowers, so that is another way to distinguish the two species.

This wasp ranges coast to coast in the United States, save for North Dakota, plus southern British Columbia and southeast Canada to the north; and Mexico and Guatemala to the south. It is apparently less common in the southeast U.S. than in other parts of its range. Late July through mid-September is the typical seasonal range for this wasp. 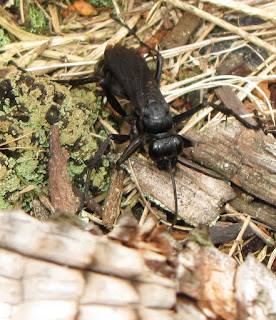