To look at a specimen of the genus Euryopis, you would hardly imagine that it is a member of the cobweb weaver family Theridiidae. Apparently it has physical characters that place it there, but when it comes to behavior, this spider departs radically from its tangled-web weaving cousins 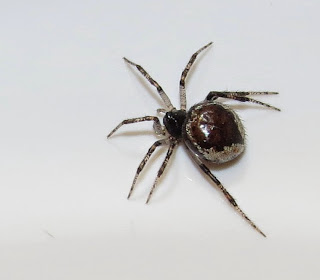 I was invited to participate in an informal "bioblitz" back on June 22, 2014, in the upper reaches of the Monument Creek watershed here in El Paso County, Colorado, an elevation of 8,500-9,000 feet. Among our small party were several botanists, one of whom brought me a couple of spiders she found while looking at plants. One of those spiders was a gravid (egg-laden) female Euryopis that I brought home to take better images.

Euryopis is placed in the subfamily Hadrotarsinae of the Theridiidae family based on shared characters like a high carapace (top of cephalothorax) that is nearly as wide as it is long; exceptionally long, flat fangs; certain anatomy of the female genitalia; and the fact that these spiders do not spin prey-catching webs.

There are about twenty species of Euryopis recorded for North America north of Mexico, and all of them are very small. Both genders range from only 1.3-4.7 millimeters in body length, males slightly smaller than females. Most species share the unique sub-triangular shape and bold color pattern on the abdomen as demonstrated by the Colorado specimen shown here. 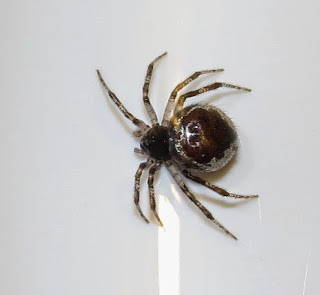 What is truly amazing about these spiders is their hunting technique. They simply sit with legs outstretched, either on the ground, foliage, or tree trunk, and wait for an ant to brush against them. This triggers a response on the part of the spider, whereby the arachnid runs around the ant, all the while flinging silk from its spinnerets and bonding the ant to the surface of the substrate before the insect knows what happened.

Once the prey is immobilized, the spider bites it, usually on a leg joint, and waits while the venom takes effect. The spider then fashions a silk "sling" that it uses to haul the victim to a place where the spider can feed without disturbance from other ants.

Ants are aggressive and pretty vicious, so few predators bother them. It is a testament to the toughness of Euryopis to mess with them. At least one species feeds almost exclusively on harvester ants, which are among the most pugnacious of all North American ants, equipped with stingers that they deploy without hesitation (Porter and Eastmond, 1981) 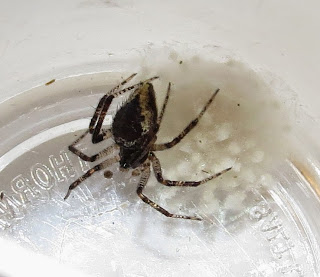 My little female spider soon spun an egg sac in captivity. The size of the bundle was surprising considering how small the spider was. It was white, hemispherical in shape, and covered in little tufts of silk as shown in the image above

Euryopis are probably not uncommon spiders, but easily overlooked due to their diminutive size and rather cryptic appearance when presented on the ground or other natural surface. Try seeking them out around ant mounds and places where ant traffic is high. 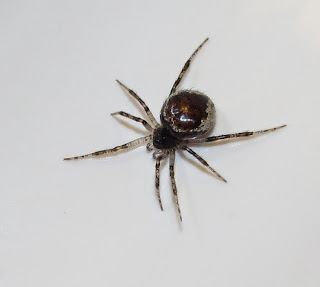