One of the spiders I vividly recall from my childhood in Oregon is a species of large hammockweb spider in the family Pimoidae, genus Pimoa. They were once part of the sheetweb weaver family Linyphiidae, but among other differences they are w-a-a-a-y bigger than your average linyphiid. 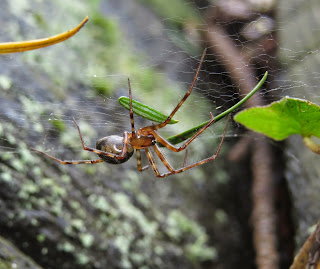 The spiders themselves measure from 5 millimeters (males) to 12 millimeters (female) in body length. Their legs are pretty long, so they appear even larger. The common name could also apply to their webs. Sometimes they can span over one yard (yes, that's three feet). I have never seen a snare that large, and in fact, considering the size of the occupant, most webs are rather small, say no more than six inches across.

Pimoids are found only along the Pacific coast of North America, the Cantabrian Mountains (Spain), Alps, and Himalayas. There are twenty-one known species of Pimoa, about 15 species in North America north of Mexico. They seem to be spiders of the coniferous forests in the "rain shadow," at least from my experience in Oregon. 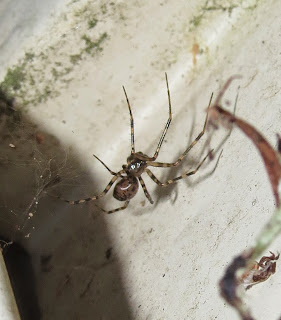 Look for their fine, net-like, horizontal webs issuing from crevices in logs, or, frequently, fences and retaining walls. It helps if there is a little dew. Otherwise the webs are surprisingly nearly invisible. The owners hide in a crevice or other retreat during the day, but can be seen hanging from the underside of the snare at night or even on overcast days.

Females make nearly spherical egg sacs that they cover with debris as camouflage. The number of eggs varies from about 80 to 100.

Like their relatives in the family Linyphiidae, large hammockweb spiders may break their legs off below the patellar (knee) segment to escape predators. This hardly compromises their agility, as you can see in the topmost image. 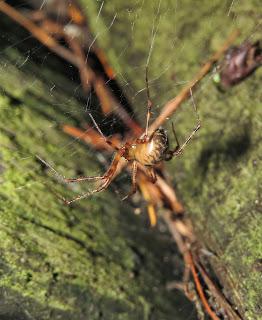 Next time you find yourself on the West Coast, take time to look for these interesting arachnids. I have to admit they are one of my "sentimental favorites."