Yesterday I came across an interesting little fly while exploring Cheyenne Mountain State Park, just south of Colorado Springs, Colorado. What I found interesting is exactly where I found them, but these are unusual dipterans in almost every regard. 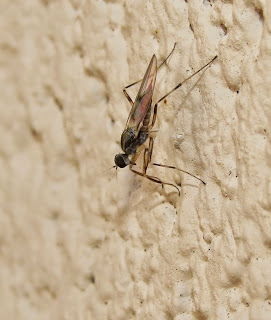 Most dance flies resemble small robber flies, and like asilids they are predatory as adults. Until fairly recently, all had been classified in the family Empididae, but the subfamily Hybotinae has been elevated as its own family now, especially by European scientists. We seem to be somewhat slower to adopt taxonomic changes here in the U.S. I would be tempted to call them "pinhead flies" because their spherical heads are so small compared to the rest of the body. 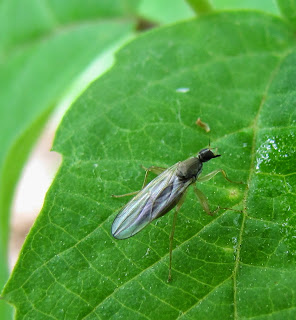 Many dance flies are restricted to specific feeding niches, such as tree trunks, the ground, on foliage, the surface of water, or in the midst of swarms of other kinds of flies. I found these particular flies on the inside walls of protected structures where park dumpsters are....well, parked. Makes sense. Garbage odors attract small flies and other insects that the dance flies would eat. Next best thing to a tree trunk, too, given there were few trees around.

Hybotid dance flies are not very big. These were about 4 millimeters. Were I not familiar with the family, I might have mistaken them for some other kind of insect entirely, such as a true bug, especially given my deteriorating vision. Their vision must be quite keen, though, as the compound eyes take up most of the head.

Dance flies seize prey with the front legs, which may or may not be modified for that task. At least some species seem to have bigger "biceps" on the front legs (the femur segment). The males of some species have modifications to the hind legs, too, perhaps to aid in grasping the female during mating. A proboscis inflicts the lethal bite, and then extraoral digestion happens as enzymes are injected and the resulting liquefied tissues of the prey are drawn back in. 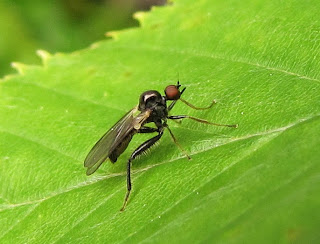 Precious little is known about the life cycle and biology of hybotids because they are of no economic consequence. We know the larvae of most dance flies seem to be predaceous as well. Some are aquatic or semiaquatic, others terrestrial, occupying microhabitats like leaf litter, dung, fungi, roots, even an owl's nest in at least one case.

Why the name "dance fly," you ask? This is derived from the mating swarms of males of many species. They gather in clouds over prominent objects, each individual seeming to bounce or "dance" in mid-air. Many other flies do this, notably midges, but empidids got the moniker.

Dance flies are particularly abundant right now, in spring, so keep your eyes peeled for them. I know, if only you had their field of view! 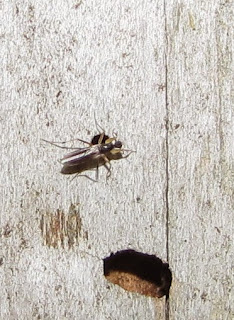