Among the more unusual insects to be found in the average home or workplace are the Firebrat and various kinds of silverfish, order Zygentoma, family Lepismatidae. They barely resemble insects, and are so primitive in their supposed evolutionary origin as to qualify minimally as part of the class Insecta. 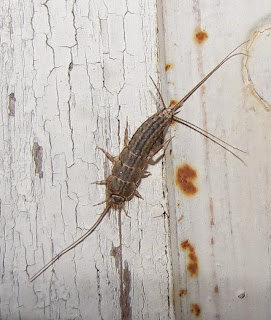 Siverfish and firebrats were formerly classified in the order Thysanura, along with jumping bristletails, but due to the confusing nature of Thysanura (at one time it even included springtails), the order name reverted back to Zygentoma, as originally established by Börner in 1904.

Members of the order, and the family Lepismatidae, are easily recognized by their flattened, torpedo-shaped bodies, with long antennae, and three long filaments issuing from the tip of the abdomen. The long appendages often break, however, and specimens without the hallmark "tails" often confound the homeowner who finds one. The bodies of these insects are covered in short hairs and scales, which make them as slippery as a fish when a predator, or person, attempts to grab one.

There are nine genera (plural of "genus") with about fourteen species, in the family Lepismatidae in North America north of Mexico. Some domestic species are cosmopolitan in distribution, having been carried to the far corners of the globe in international commerce.

Among our common species are the Silverfish, Lepisma saccharina, Four-lined Silverfish, Ctenolepisma lineata, and the Firebrat, Thermobia domestica. Collectively, they range from 8-15 millimeters in body length. The rear-end (caudal) filaments and long antennae make them appear even larger. 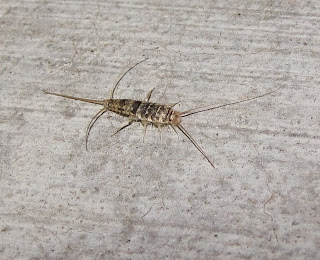 The Firebrat tends to prefer warm, dry situations, such as around furnaces and the insulation around water pipes; silverfish enjoy more humid surroundings.

Lepismatids are typically nocturnal, hiding in nooks and crannies by day. They can run nearly as rapidly as a cockroach when startled. They feed on all manner of carbohydrates, with a particular fondness for starchy materials. Among their favorite meals is the paste used in bookbinding. Consequently, they can be an occasional pest in libraries, warehouses, and storage facilities, especially those without climate control. Got wallpaper? Maybe not for long, as the paste adhering it to your interior is fair game. They also eat starch in clothing, particularly when on silk and rayon fabrics. Oatmeal, damp wheat flour, and cereals are also on the menu.

Silverfish and the Firebrat live a surprisingly long time: at least two years under laboratory conditions. They go through incomplete metamorphosis, the young stages resembling the adults but not being sexually mature. They molt a number of times to reach adulthood, but then they keep molting the rest of their lives. At least one specimen in the lab molted over forty times in a 2.5 year lifespan. Perhaps the molting replenishes the scales lost in the course of squeezing into crevices or slipping through a predator's jaws.

Because of their ancient lineage, lepismatids do not mate with internal fertilization. Instead, a male lays down a packet of sperm called a spermatophore when near a female. He then binds her loosely with strands of silk spun from glands in his mouthparts. Thus restrained, she has little choice but to pick up the spermatophore and insert it into her genital opening. I know, it sounds like a sequel to Fifty Shades of Grey. She eventually lays eggs singly or in small batches in cracks and crevices. 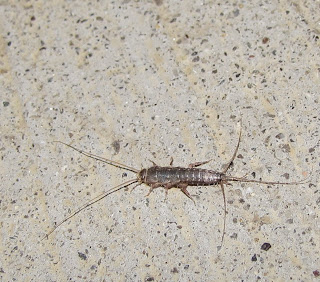 Thankfully, silverfish and the Firebrat are rarely abundant enough to be more than a novelty or a nuisance in the average dwelling, office, or other building. Should you feel compelled to control them, there are plenty of ".edu" websites that offer cultural, non-chemical, and chemical solutions. You might simply prefer to let predators like the house centipede do that job, though. What? That freaks you out even more?