When I lived in Ohio I had the great honor of being introduced to Dr. George Uetz at the University of Cincinnati. At the time he had a graduate student, Dave Clark, who was doing research on the courtship behavior of the Dimorphic Jumping Spider, Maevia inclemens. Ever since then I have had a special place in my heart for this unique member of the Salticidae. 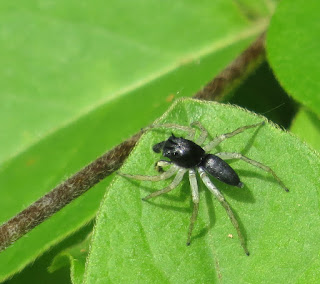 What makes this spider so special, you ask? The name says it all. The male of this species comes in two distinct forms: a "tufted form" that is all-black with white legs; and a "gray form" with black pinstripes and orange spots and chevrons. Not only do they look like separate species, but they behave like two different spiders, too. Each male performs a complex dance that is different from that of the other form. 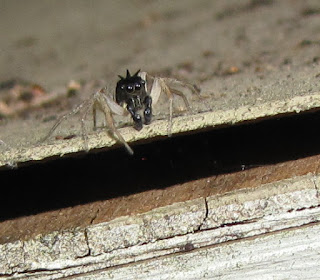 The tufted form, named for the triple-Mohawk style hairdo, literally stands on tiptoe, dips his abdomen, and waves his front pair of legs overhead at a prospective mate. The gray form takes a "low rider" position and sidles back and forth. 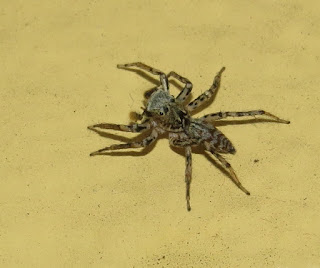 Dave Clark capitalized on those differences, as well as his expertise in video, and created animations of a tufted form male doing a gray form dance, and vice versa. He then played his mixed-up dance mix in front of live female spiders. Jumping spiders have better eyesight than any other terrestrial invertebrate, so they could actually watch, and react to, the videos on a monitor. This was back in the late 1980s, so Dave dubbed his lab "MTV" for "Maevia Television." 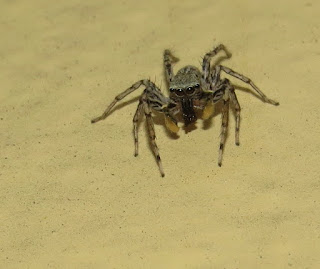 The Dimorphic Jumper is a species commonly encountered in the eastern half of the U.S. where it prowls understory foliage, climbs on walls and fences, and occasionally enters homes. These are not overly large spiders, males ranging from 4.8-7.0 millimeters in body length, females 6.5-10 millimeters. Females have consistent markings, being mostly pale with a pair of orange or red racing stripes running down the back of the abdomen.

The first time I saw a tufted form male of this species, it was on a sidewalk in Cincinnati and I initially mistook it for a carpenter ant. This species is not generally considered an ant mimic, but considering that carpenter ants forage in the same places as Maevia, it is not out of the question I suppose. 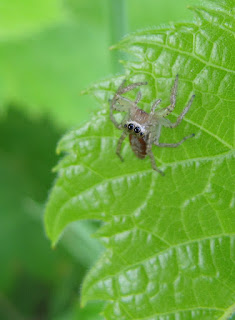 So what was the result of those experiments? The dance of the black form male is apparently more successful at attracting the attention of a female from a greater distance, while the dance of the gray form male is better at wooing a lady spider closer to him. You can see videos here on YouTube of both kinds of males performing. There is no word on whether the females presented with the wrong combo of male appearance and dance moves suffered psychological damage. 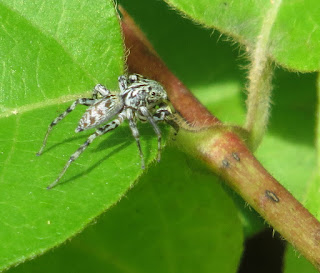 "Is there a female down there?"