"New" Insight Into Behavior of Some Cuckoo Wasps (Chrysididae)

There is always something new to learn. That is the promise of entomology, and it is validated almost daily. Just last week (January 11) I came across this amazing image of Omalus puncticollis by Emily Hobson on my Facebook newsfeed. Since I know that many species of cuckoo wasps feed on the "honeydew" secreted as a sugary, liquid waste product by aphids and related true bugs, I suspected that the wasp in this photo was stimulating the little bug into producing some honeydew. 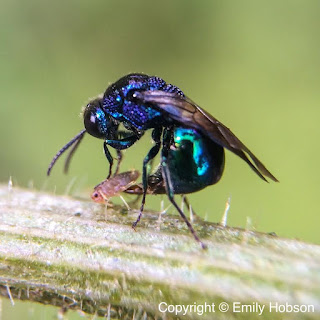 Female cuckoo wasps do not have stingers, so I knew that this was not a case of the wasp stinging a victim to then either consume herself or take back to a nest.....or so I thought. Cuckoo wasps are parasites of other kinds of wasps, and it turns out that this is what the wasp was up to, but indirectly.

One of the comments on the image revealed the extraordinary truth:

"This is really interesting. The species is probably Omalus violaceus, and the pic shows a behaviour, what is not formally described until now. The female Chrysididae wasp lays its egg into the Aphid. When a Crabonidae wasp (e.g. Pemphredon) takes the aphid as prey and carries it into its nest, then the chrysidid larva will appear earlier and develop in the nest instead of the larva of the crabronid wasp. Until now, many wasp researchers still think that the Chrysididae infect the host nest directly, which is not true. This behaviour is observed or suspected for Omalus and related genera, and for Holopyga." - Christian Schmid-Egger

So, the chrysidid wasp larva is a "cleptoparasite" that eats the food provided by the host wasp for its offspring. It literally steals from the mouths of the host larva, starving it to death. 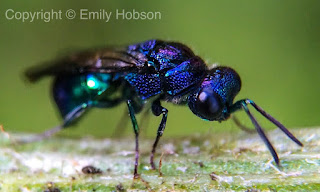 These images were taken in Europe, but we have related species in North America, including a few that have immigrated from overseas as a result of accidental introductions on global commerce. I wrote about one such species, Pseudomalus auratus, in a previous blog post.

Science and social media is becoming a marriage made in heaven, not only for informing the general public, but for communication between scientists, too. I am left now to wonder how much else I think I know, that I really don't know. In any event, you'll know when I know. 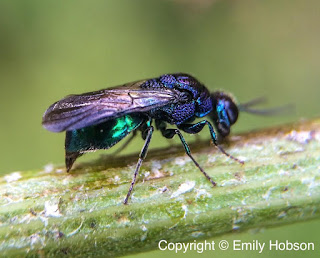 Special thanks to Emily Hobson for sharing her images, and for Christian Schmid-Egger for permission to use his quote here.