Of all the biting flies we have in North America, one of the most annoying has to be the Stable Fly, Stomoxys calcitrans. They are especially abundant around farms, ranches, zoos, and other places where large mammals are kept. Unfortunately, they will also bite people when livestock is not close at hand. 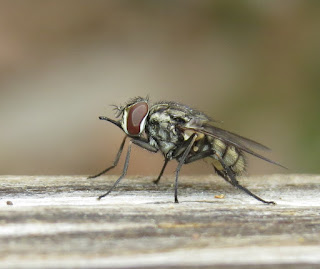 Like any notorious villain worth their salt, the Stable Fly has it aliases: "beach fly," "dog fly," and "lawn-mower fly" among them. The insect has also fled local jurisdiction. It is apparently native to Eurasia and Africa, with speculation that it probably came to the New World in colonial times, maybe in ship's ballast.

The Stable Fly is easily dismissed as a House Fly under cursory examination. Both flies are in the family Muscidae; and both are about the same size, the Stable Fly measuring 5-7 millimeters. Each species is mostly gray, with black "pinstripes" down the back of the thorax. The Stable Fly differs mostly in having a slender, black, slightly curved beak tucked under its "chin." 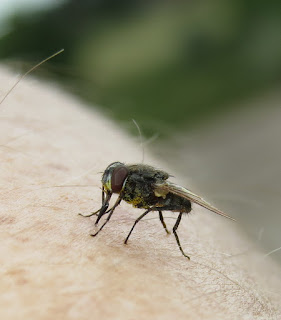 While it is only the female mosquito, black fly, deer fly, and horse fly that sucks blood, both genders of the Stable Fly can bite. This is not a painless event, either. An immediate, sharp sensation occurs when the fly plunges its piercing mouthparts into your skin. Shoo it away and it returns instantly, and repeatedly. This persistence is perhaps the main source of our aggravation. 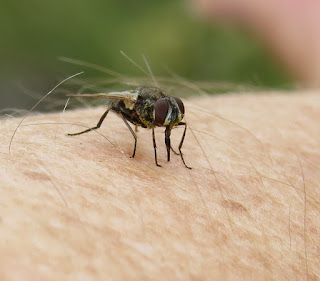 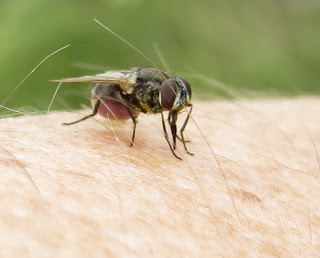 The adult fly is only one quarter of the life history of the species of course, with eggs, larvae, and pupae making up the other three stages in its metamorphosis. The female fly deposits her eggs singly, or in clusters of 25-30, in wet, decaying fibrous organic matter. Typical breeding material includes horse manure, silage, rotting hay, grass clippings, and partially composted livestock bedding. 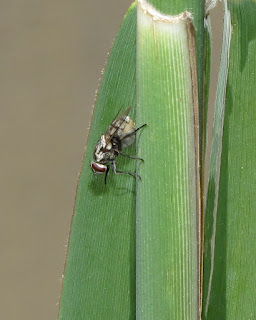 The eggs hatch in one to fourteen days. The maggots that emerge take anywhere from 11-30 days on average to mature. The interval is largely determined by temperature, humidity, and food quality and quantity. The hotter and more humid the substrate, the faster the maggots develop. The maggot molts twice after hatching, and may be up to twelve millimeters in length by the time it enters the pupal stage.

The pupa represents the larva's third molt, the shed exoskeleton of which forms a hard, oval, dark brown "capsule" around the pupa itself. The pupal stage typically lasts six to twenty days. The adult fly then bursts out of its capsule by more or less inflating the front of its head. 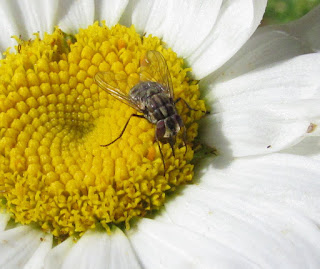 The determination of Stable Flies in their feeding behavior naturally induces stress in its victims, and this can take a toll on livestock. A mere twenty flies on a cow can result in decreased milk production. Mild anemia and weight loss can also be a result of high numbers of feeding Stable Flies.

Were it such that general malaise was the only negative effect of Stable Fly populations, it would possibly be tolerable. Unfortunately, Stomoxys calictrans can also carry a variety of diseases. Most of these are of limited effect in the U.S., thankfully, but they cannot be dismissed entirely. Here, the fly can transmit anthrax, which affects livestock, pets, and people. Anthrax exhibits a variety of symptoms, the worst of which include lesions of the lungs or brain. 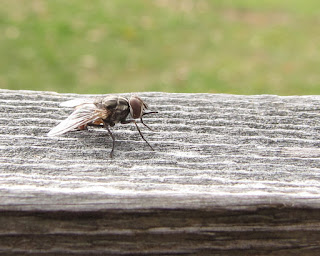 The next time you visit a local farm, ranch, or zoo, you might want to consider applying that DEET-based insect repellent to help fend-off attacks of Stable Flies. It will make your experience much more enjoyable if it is bite-free.