It’s a moth! It’s a fly! It’s….a “moth fly!” So goes the confusion upon encountering one of the most common yet confounding dipterans. Moth flies belong to the family Psychodidae in the order Diptera. Most people have seen these diminutive, fuzzy creatures in the bathroom, perched on the side of the sink basin, or on a nearby wall. Where do they come from? Are they harmful? 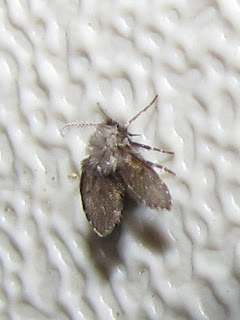 The answer to the second question is easier than the first. Moth flies are not harmful, at least in the sense of public health. They do not bite, unlike their cousins the sand flies, also in the family Psychodidae, but members of a different subfamily. Sand flies not only bite, but are vectors of leishmaniasis, a parasitic disease occurring mostly in the tropics. Moth flies are mostly a nuisance, though they can reach high population densities around sewage treatment plants.

Adult moth flies are active mostly in the evening hours, and are attracted to lights after dark. Consequently, they may easily enter the home through an open door or window. While they can breed indoors (more on that later), they normally seek wet, decaying organic matter where the female can lay from 30-200 eggs in a loose cluster. Typical sites that attract them include clogged rain gutters, compost heaps, birdbaths, sewer drains, septic tanks, and filter beds at sewage treatment facilities. 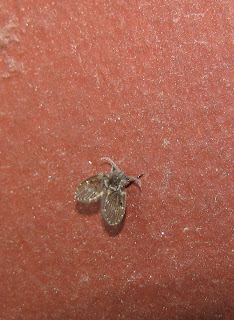 I find it amusing that the scientific name of one of the most common species of moth flies, the “Filter Fly,” is Clogmia albipunctata. They certainly don’t cause clogged drains. In fact, they may be better at preventing clogs than a bottle of Draino or Liquid Plumber. This common household species can carry out its life cycle inside the pipes under your sink or shower, no matter how clean your bathroom is. 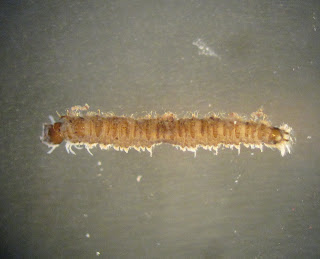 The eggs hatch between 32 and 48 hours after the female lays them, the larvae proceeding to feed on algae, fungi, microbes, and other organic matter in the gelatinous film of goo lining the average sink drain. I suspect that the many questions I receive about “worms” in the sink or shower refer to mature larvae of Clogmia that are seeking a place to pupate, or that are flushed from their normal feeding niche. It takes a larva from nine to fifteen days to reach the point where they are ready to graduate to the pupal stage. The pupa usually resides on the surface of the same organic film as the larva inhabits. An adult fly emerges from the pupa in an astounding 20-40 hours.

Moth fly larvae are actually considered beneficial organisms in the treatment of municipal sewage, so bear that in mind the next time you encounter one. You have to admire them just a little bit for capitalizing on the artificial habitats we have inadvertently created for them.

Sources: For way better images of adults and larvae, take a look at this remarkable life cycle series shot by my good friend Ashley Bradford. She is definitely not the squeamish sort! Also check out this fantastic fact sheet produced by the Connecticut Agricultural Experiment Station. It gives more detailed information than I have room for here, including how to prevent infestations and deal with existing ones. 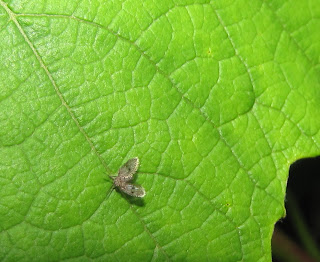