Arriving in Colorado Springs in early October, I was not optimistic that I would find many, if any, wasps still active in the chilling air. Much to my surprise there are still some on the wing, even at high altitudes. Monday, October 10, Heidi and I traveled up into the Front Range to Cripple Creek and the surrounding area. There, walking around on the snow, I found a male Prairie Yellowjacket, Vespula atropilosa. 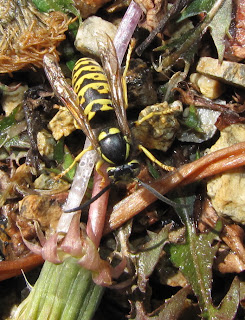 Heidi remarked that she thought the Western Yellowjacket, Vespula pensylvanica was the only species of that genus living in the area. Actually, there are six species total known from Colorado. Yellowjackets could be considered mostly boreal in their distribution patterns, ranging south at higher elevations where the climate resembles that of higher latitudes.

This particular specimen could have been blown up to its 9,000 foot or so location, too. The colonies of V. atropilosa tend to be smaller than those of more “urban” species, and usually decline earlier in the season, too, so I was somewhat surprised to see this one.

This male exemplifies the yellow or “xanthic” phase of this species. They also come in a black or “melanic” phase that is more black than yellow, as shown in the diagram below from Roger D. Akre’s The Yellowjackets of America North of Mexico (USDA Agriculture Handbook No. 552, 1981), and another specimen I imaged on October 13 in Colorado Springs. 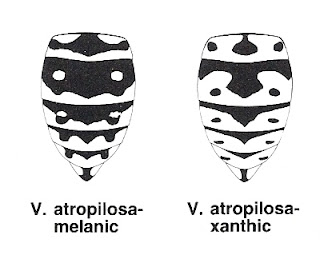 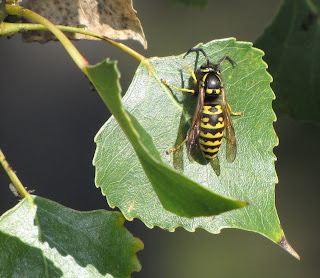 The Prairie Yellowjacket nests preferentially in abandoned rodent burrows. Nests have also been discovered in tree hollows, under steps, and between the walls of houses. One truly aerial nest was found in Pullman, Washington, but this is decidedly an anomaly. The paper combs are surrounded by layers of “envelope,” typically rather coarse as is the case in most subterranean yellowjacket species. V. atropilosa nests are dirtier than most, with the bodies of deceased wasps and other debris incorporated into the paper envelope.

The greatest number of workers in any of the nests studied by Dr. Akre and his colleagues was 504. These are not your picnic-harassing, garbage-gathering yellowjackets, either. They have retained their predatory nature and hunt mostly spiders, harvestmen, flies, insect larvae, and true bugs as food for the larvae back in the nest. Adults feed on aphid honeydew and flower nectar to fuel their flight. 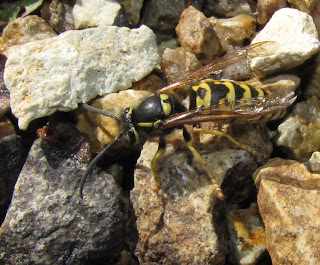 The Prairie Yellowjacket is restricted to western North America, ranging from central British Columbia south and east through southern Alberta, Washington, Oregon, California, Idaho, western Montana, Wyoming, Utah, most of Colorado, and northern New Mexico and Arizona. It avoids nesting in truly urban locations in my experience, though nests in yards are apparently not uncommon.

I look forward to finding more interesting yellowjacket species here in the Rocky Mountains, and I reserve the right to revisit this particular species in future blog posts.