Today, as I write this, there is snow on the ground and the temperature is somewhere in the 20s (Fahrenheit). You can’t blame me for harkening back to July 11 when it was warm and I was hiking with friends in Emerald Valley near Cheyenne Mountain here in the Front Range of Colorado. One of the insects that excited me the most that day was Pseudomasaris vespoides, one of the “pollen wasps” that stands in such stark contrast to its social and predatory relatives. 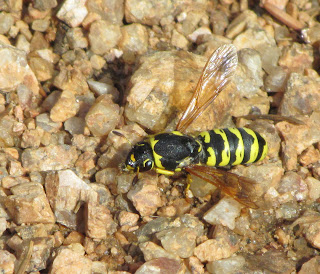 Pollen wasps comprise the subfamily Masarinae in the family Vespidae. They collectively occur across the globe, in western North America, southwestern South America, northern and southern Africa, southern Europe, central Asia, and most of Australia, absent from tropical regions. Only the genus Pseudomasaris exists in North America, with 14 species. 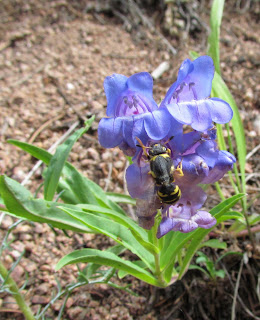 These are solitary wasps, each female constructing her own mud nest and provisioning each cell with pollen and nectar, more like a bee than a wasp. The wasps visit Penstemon, or Phacelia and Eriodyction almost exclusively, with additional records for some other flora genera. This pollination relationship is termed “oligolectic” when an insect is obliged to harvest pollen from such a limited diversity of flowers. 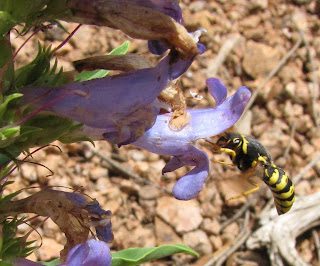 The female Pseudomasaris vespoides that I observed on that July day were all visiting Penstemon blossoms. I did not see any males, but populations of this wasp peak in late June with males emerging before females, so their absence later in the year would not be peculiar. Males, easily identified by their very long, clubbed antennae, patrol patches of flowers likely to be visited by females. This is in contrast to the hilltopping behavior of P. maculifrons that I addressed in a previous post.

Females fashion earthen nests comprised of several cells. While most Pseudomasaris adhere their nests beneath stones or other sheltered situations, P. vespoides tends to attach its nests to twigs out in the open, like the one shown below, from Catalina State Park in southern Arizona. The nests may be parasitized by the cuckoo wasp Chrysurissa densa. 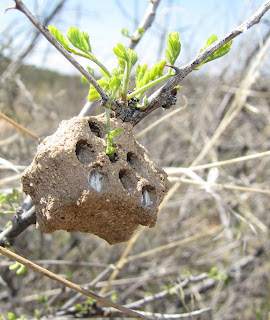 P. vespoides is a relatively widespread species, occurring from Washington state south to California, Arizona, and New Mexico, east to Wyoming, Nebraska, and South Dakota. Females and males are about the size of your average yellowjacket wasp and can easily be mistaken for their social cousins. Pollen wasps, however, do not have the longitudinal fold that other vespid wasps display when the insects are at rest. Pollen wasps also have clubbed antennae, whereas other vespids do not. 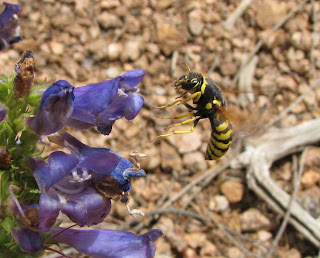