Perhaps I should call this entry “early spring wasps.” We have had a very mild winter here in Colorado Springs, Colorado, and it seems that spring comes earlier and earlier now, no matter where one lives. Certainly more southerly latitudes are experiencing spring right now. Still, I am amazed by the wasps I am finding on the wing already.

While out hiking an urban trail on February 29, I found female Podalonia cutworm wasps out and about in the 58°F temperature. Perhaps they were hunting for those Army Cutworm caterpillars that have also been roaming on warm days. One of the wasps I observed was digging, but I could not discern whether she was excavating a burrow for prey she already had, or was unearthing a moth larva. 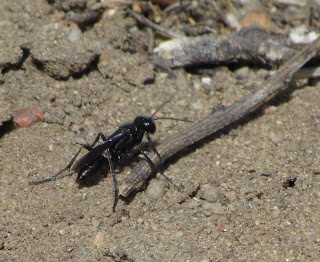 A few days previous to Leap Day, Heidi had brought me a wasp that she found flying around one of the exhibits in Primate World at the Cheyenne Mountain Zoo where she works. She had already correctly assumed it was an ichneumon wasp. Many species in the subfamily Ichneumoninae overwinter as adults, sequestering themselves under bark, deep inside rotten logs, and other protected situations. Unfortunately, I didn’t get around to imaging this specimen (below) until after it had expired, but in my defense it is very difficult to differentiate a wasp in torpor (a state of greatly reduced metabolism) from a deceased one. 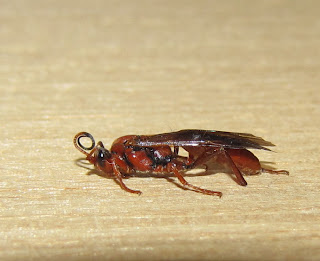 Social wasps like yellowjackets and paper wasps also overwinter as adults, though it is almost exclusively females that do so. So, I was not completely surprised to find Western Paper Wasps, Mischocyttarus flavitarsis sipping water from melting snow in a narrow arroyo in Red Rock Canyon Open Space on March 5. The high temperature on that day was 68°F. 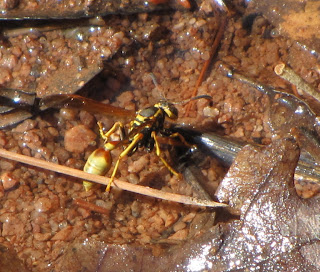 Any female paper wasp has the potential to be the “foundress” of a new colony, so most of the females survive the winter. Only yellowjacket queens are capable of reproducing, so you will find no workers until summer. I would expect to see queens of some species out by the end of March in most places, but here at higher elevations they seem to wait much longer to emerge. Can’t blame them, as blizzards in April are not uncommon along the Front Range.

One wasp that really did surprise me was another specimen I encountered in that narrow dry arroyo. My initial observation led me to think it was a spider wasp (family Pompilidae), but I was able to get fairly close to it and get some respectable images. Turns out it was a wasp in the family Crabronidae, tribe Larrini. Members of this tribe prey mostly on crickets or grasshoppers. Considering that there are indeed grasshoppers out already, too, I guess I shouldn’t be surprised. 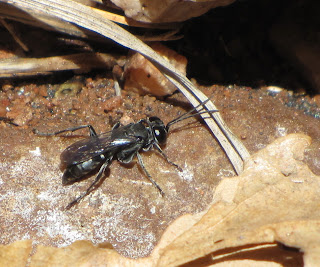 I’m still awaiting help to identify this wasp more specifically, but my guess is that it is probably in the genus Liris. Watch this space for updates in the comments, but don’t put your life on hold. These things take time.

Oh, I almost forgot! Just yesterday, a warm and windy 69°F day, I encountered yet another wasp on the Rock Island Trail near the intersection of Constitution Avenue and Academy Boulevard. Yes, this is pretty urban territory, paralleling an old railroad bed. What should come scurrying across the concrete path but a velvet ant (family Mutillidae). Female velvet ants are wingless wasps that, as larvae, are parasitic on other insects. They are often found digging open the burrows of other solitary wasps. 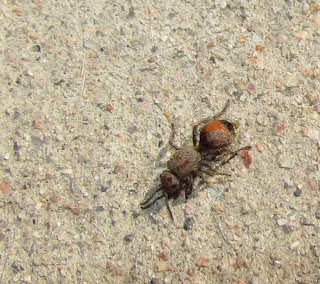 My friend Justin Schmidt thinks the assumption that velvet ants don't survive the winter may be incorrect. He is currently conducting catch-and-release experiments to see if he can find the same females in autumn and the following spring. The specimen I found is clearly encrusted with soil, suggesting she recently emerged from underground. Whether she emerged from a pupa or a hibernaculum is open to speculation.

The weather here is supposed to take a turn for the colder over the next few days, but bounce right back up into the low 60s early next week. I’ll be interested to see if the insect and spider populations skip a beat, but I doubt they will. One has to appreciate the endurance and resilience of insects, if nothing else about “bugs” is admirable.