A friend recently asked if I might be able to identify a wasp from images taken by a third person. That person, Jeffry B. Mitton, was then kind enough to grant permission to use his images to complement my own photographic documentation of the “cutworm wasps,” genus Podalonia. 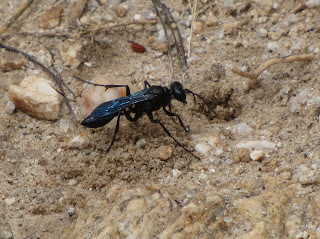 These slender, thread-waisted wasps are frequently mistaken for other members of the family Sphecidae. Females look like small Sphex species, while males are easily confused with Ammophila wasps. Podalonia and Ammophila both belong to the subfamily Ammophilinae in fact. There are nineteen species known in North America, but the genus also occurs in Central America, Eurasia, and Africa. Identification of the species hinges on minute characters like the presence or absence of arolia (tiny pads between the claws on each “foot”), so images of live, wild wasps rarely suffice for species determination. 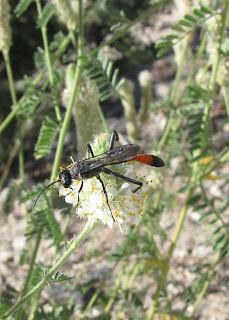 Cutworm wasps are named for the habit of the solitary females to hunt for soil-dwelling caterpillars (“cutworms”), paralyze them, and store them as food for the wasp’s offspring. The wasp digs her burrow after she procures the prey, which is the opposite behavior sequence of most wasps in the Sphecidae family. Only one caterpillar goes in the bottom of each burrow, and a single egg is laid upon it. The opening of the tunnel is then sealed and the wasp begins seeking another victim to repeat the process. I have yet to photograph one of these wasps with a caterpillar, but that is what Jeff Mitton did. Unfortunately, I do not know how to save those images from the e-mail to my computer. So, here is an image from Kim Moore instead. 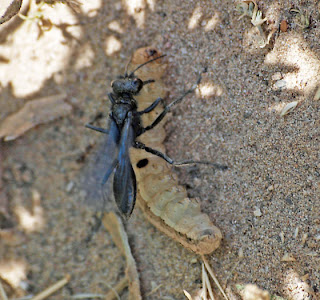 Another phenomenon I have not witnessed is the nightly aggregation of some species in sheltered spaces. Ironically, I was on a field trip with an entomology class from El Camino College on the weekend of May 21-22 when one of the students discovered a gathering of female Podalonia under bark on a Ponderosa Pine stump. This was at the James Reserve in the San Jacinto Mountains of southern California. Several specimens of the wasps were collected before I learned of the find, and a return to the stump revealed no specimens present. Males also aggregate, as confirmed by this image. Several hundred individuals can pack together in such clusters. This behavior is thought to correlate with inclement weather, and possibly overwintering in the case of females, but perhaps it is a more common occurrence. 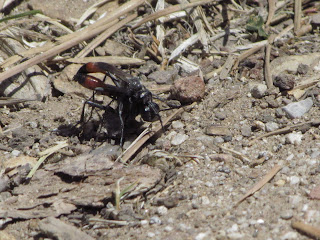 Mating is something these wasps seem to do quite frequently, judging by my own images. Males are on top. Both genders enjoy sipping flower nectar, and sometimes they satisfy their thirst and sex drive at the same time.

Podalonia are most abundant in the western United States, but you should be on the lookout for them almost anywhere. They are certainly welcome allies in the garden and agricultural field where they can dispatch a good number of pest caterpillars. Meanwhile, you can find videos of some of the European species in action on YouTube.com and Wildlife Insight. 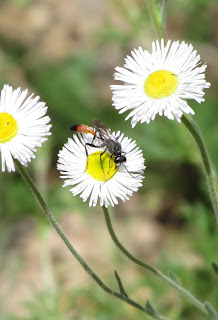