Today’s edition of “True Bug Tuesday” is all about the Red-shouldered Bug, Jadera haematoloma, family Rhopalidae. Last week, my wife and I happened upon a large number of this species in various life stages here in Colorado Springs. I went back a couple of times to get more and better images. 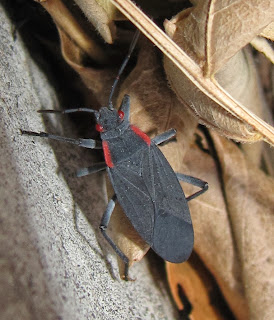 At first glance, it is easy to mistake Red-shouldered Bugs with boxelder bugs in the genus Boisea. Indeed, they both fall under the more general category of “soapberry bugs,” named for the affinity of these insects for the fruits of certain trees in the family Sapindaceae. Their appetite extends far beyond the berries and seeds of those and other trees and plants, though. They have been observed feeding on flower buds, oozing sap, and even dead insects. 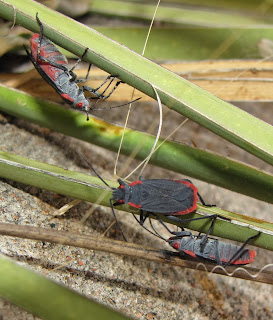 Adults of Jadera haematoloma are overall slate gray with fewer red markings than boxelder bugs. They measure 9.5-13.5 millimeters in body length. Some specimens are brachypterous, meaning they have shorter wings than normal, revealing a bright red abdomen with a black bar or two on those exposed segments. 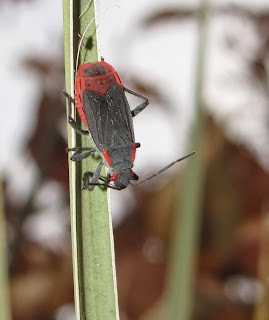 Nymphs lack wings, so the front half is gray while the back half is red. The nymphs can get very bloated while feeding, as demonstrated by the one imaged below. The nymphs pass through five instars (an instar is the interval between molts) before reaching adulthood. Freshly-molted adults are bright pink or orange. 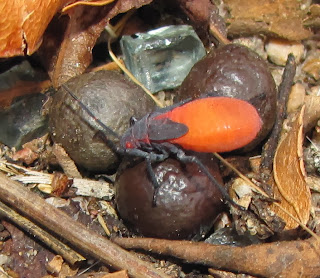 There are usually at least two generations per year, more in the southernmost states. The bugs mate “tail-to-tail” and are thus easily distinguished from solitary individuals. Females unreceptive to mating signal that fact to approaching males by making noise. They stridulate by rapidly rubbing lateral edges of the abdomen against the adjoining thoracic segments.

A mated female digs a hole about one centimeter in depth in dry soil. There, guarded by the male, she lays a batch of up to twenty eggs. The ova hatch in about two weeks. One female, which usually mates multiple times with different males, can produce between 400 and 800 eggs in her adult lifetime. 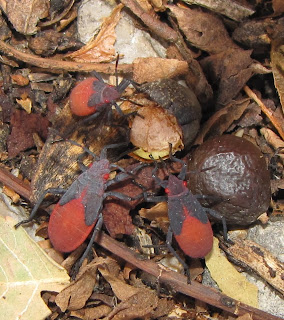 Both nymphs and adults can overwinter in cracks, crevices, and other cozy niches. They occasionally take shelter inside homes and other buildings like boxelder bugs, rendering them a “nuisance pest” in some places. 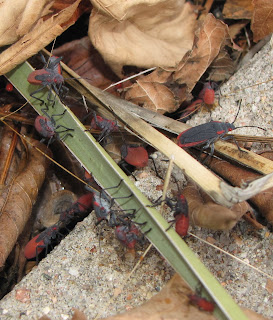 The Red-shouldered bug is also known as the Goldenrain Tree Bug. It is native to the U.S. from Virginia south to Florida and west to Wisconsin, Kansas, Colorado, Arizona, and southern California. South of the border the species occurs from Mexico and the Caribbean to Colombia and Venezuela. It has also been accidentally exported overseas, at least to Asia.

This insect is easily confused with boxelder bugs, and any number of seed bugs in the family Lygaeidae which can be of similar size, coloration, and abundance. One must look at various subtle structural characters, rather than color and pattern, to distinguish them with any degree of certainty. With practice, however, one can render a confident ID in the field. 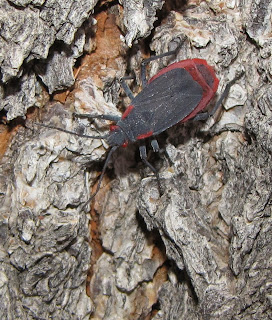