Here in Colorado Springs on July 16, 2013 I had the good fortune of encountering an adult female thread-waisted wasp, Ammophila procera, lugging a caterpillar to a burrow she had prepared previously. Even better, I remembered that my camera has the capability to take video. 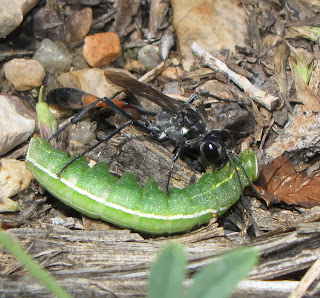 I was taking pictures of a skipper butterfly when I caught a glimpse of something moving almost under my feet. It was the wasp hauling her prey through the tangled vegetation. Getting images is a challenge because if you are too far away you get little detail, but if you venture too close you disrupt the behavior if you don’t scare the wasp into abandoning its prey altogether. I have done the latter before and felt guilty afterwards.

I was initially intent on getting the still images, when I remembered I could also get video. That was the same moment the wasp took off at a breakneck pace, making it almost impossible to follow her. Her ability to run with such awkward cargo would put a human athlete to shame. Anyway, she eventually paused, propping her limp caterpillar victim in the crotch of a plant while she went off to explore parts unknown. 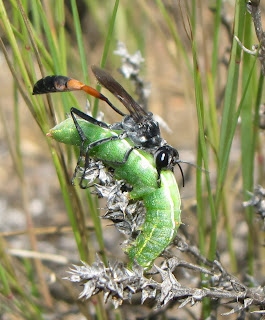 I patiently waited and, sure enough, she returned. Soon, she resumed her trek, eventually reaching a more open spot. She promptly dropped the caterpillar, removed a large clod or pebble that was blocking her burrow entrance, dove down, turned around, popped back up, grabbed the caterpillar, and in an instant there was no sign of either creature. Without knowing the location of the burrow entrance ahead of time, I did not stand a prayer of recording the action.

A short time passed, presumably while the wasp laid an egg on her victim, and then she appeared at the surface again. She quickly began closing the burrow, permanently, this time, and at last I was able to capture her energetic activities in moving pixels. The location of all this drama was close enough to an airport that the sound of arriving and departing aircraft overwhelmed much of the audio, but I managed to find a portion that was relatively quiet. Listen for the buzz of the wasp’s wing muscles as she works. 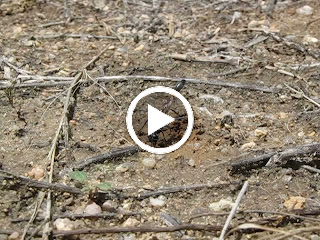 Since this encounter I have learned how to recognize when a wasp might have a burrow in a certain spot. If I walk by and startle a wasp, but it does not leave, there is high potential that she has a burrow in the immediate vicinity and I should back off slightly and watch where she goes. I managed to get video of another Ammophila and two Prionyx atratus later that same day I got this video. 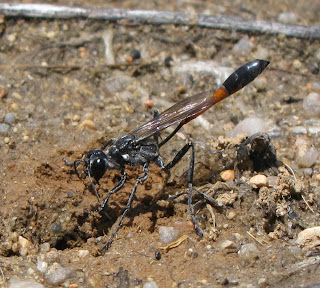 You can improve your chances of capturing the behavior of solitary wasps by being observant of their behavior, and putting yourself in the appropriate habitat. Open areas with sandy soil are favored nesting sites for many different species of wasps. They are not aggressive insects, but instead intent on accomplishing the business of providing for their future offspring. Happy wasp-watching!