Early spring along the Front Range of Colorado is deceptive. Few flowers are in bloom by mid-March, and there is little color to indicate that life has changed since winter's onset. Tiger beetles to the rescue! So far this spring, local bug-watchers have seen and photographed nine species of these exquisite animals. 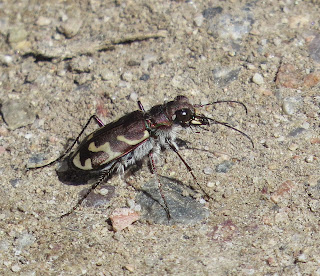 Tiger beetles were once placed in their own family, Cicindelidae, but are now considered a subfamily (Cicindelinae) of the ground beetles, family Carabidae. Their taxonomic "demotion" has not diminished enthusiasm for these charismatic predators, a favorite of entomologists and increasingly popular among naturalists in general. 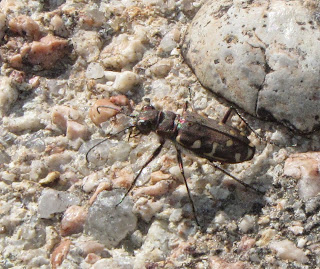 The common tiger beetles of the genus Cicindela prefer open, sandy habitats such as beaches, dunes, and barren paths through prairies and forests. Some are agile enough to negotiate obstacles on rocky shores and riverbanks, too. It is frequently a matter of luck finding them. Perfectly appropriate habitats may be devoid of tiger beetles, while other locations are chalk full. 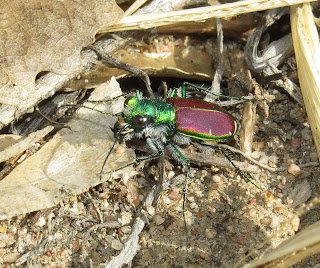 Cicindela tiger beetles average 11-14 millimeters in body length. Most are brown with ornate ivory markings, but a few are metallic green or red, or both. Most are decorated with white hairs that help insulate them from the hot sun. They have large eyes, long legs, and enormous mandibles. 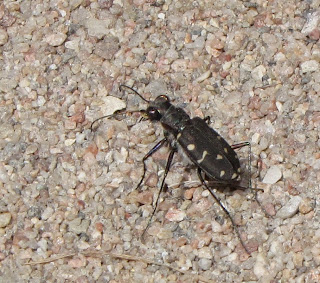 Most tiger beetles you see will be running away from you, but sit and watch and eventually they become accustomed to your presence and resume normal behavior, like hunting. Tiger beetles pursue small invertebrates, including ants. The beetles have excellent vision and quickly detect the movement of a potential meal. They run after it, but may stop before they reach their target. Tiger beetles are so fast they can actually outrun their ability to focus. So, they stop, re-focus, and dash off again. Once they overtake their prey, those menacing jaws quickly reduce the victim to shreds. 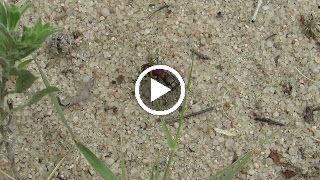 Another favorite activity of tiger beetles is making more tiger beetles. You will often see one beetle atop another. The one on top is the male. The pronotum (top of thorax) of the female of each species has notches and dents that will only accept the toothed mandibles of the corresponding male. This stops interbreeding with the wrong species, but allows the right male to "get a grip" on the object of his affection. 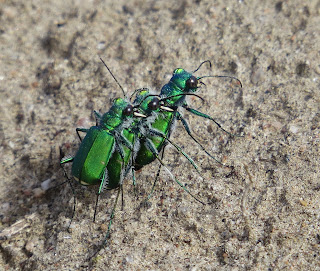 Competition for the girls is keen, and sometimes a male will be late to the party. The result can be a comedic "conga line" of stacked cicindelids. 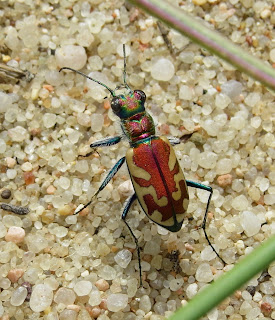 Even in the relative cool spring and fall months, tiger beetles are in danger of overheating on the scorching sand. Consequently, they may seek shade under low-growing plants. They also use their long legs to elevate themselves high off the ground. Being on "tip-toe" makes them no less wary and agile. 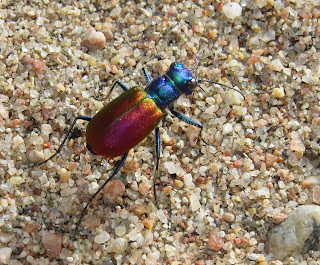 The metallic nature of tiger beetles is structural, rather than the result of pigmentation. Layers in the exoskeleton reflect various wavelengths of light. Despite their colorful appearance, the beetles are still surprisingly cryptic. When disturbed, tiger beetles can fly, then alight facing the direction of the threat, reducing their profile. Sometimes, they hunker down in a depression in the sand, becoming even more inconspicuous. Ivory patterns on the elytra (wing covers) break up the outline of the beetle even more. 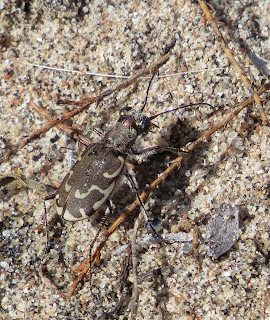 The tiger beetle species present as adults now are spring-fall species that spend the summer as larvae and pupae in tunnels in the soil. The larvae are ambush hunters that each live in a vertical shaft of their own making. They present their flat heads at the entrance to the burrow, flush with the opening. Any small invertebrate that passes by risks being seized by the larva.

The summer months see a different set of species that share the same habitat. So, visiting the same site at different times of the year can yield an entirely different fauna. 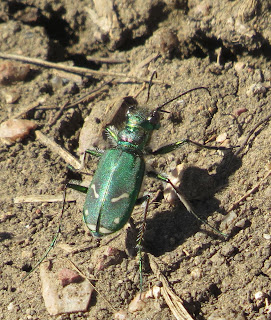 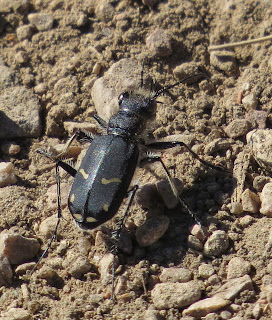 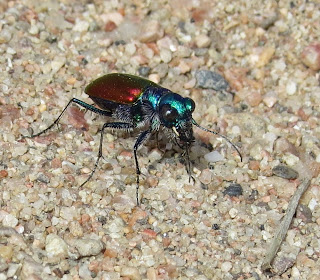 Mostly, simply enjoy watching these spirited insects as they go about their lives. At the least it is a rewarding diversion, but it can lead to new discoveries, too. Our understanding of even the distribution of tiger beetle species is poor; and because they are found in habitats vulnerable to human development, some species are threatened or endangered.