Beetles have truly bizarre lifestyles in general, but one of the most astonishing is the life cycle of "anteater scarab" beetles in the genus Cremastocheilus. These are rather small, non-descript insects that are easily overlooked. What a pity. I guarantee you will want to find one yourself after reading this story. 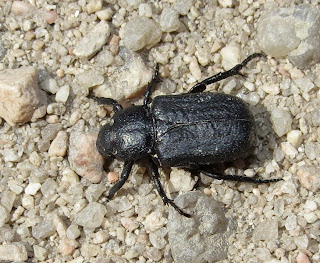 This is the time of year when you are most likely to encounter these beetles. They are dispersing themselves to find new hosts. They fly very well, and fast, but crash land in places frequented by scouting ants during the day.

There are roughly 35 species of Cremastocheilus currently recognized in North America north of Mexico, but the genus is being revised. Most are dull black, about 10 millimeters in body length, flattened, and very angular. The exoskeleton is exceedingly dense, often with pits or wrinkles, or both. These are heavily armored insects, and for good reason.

Anteater scarab beetles are just that: they feed as adults on the larvae and sometimes the pupae of ants. The host ant species are mostly mound-builders in the genus Formica, but other hosts include honeypot ants (Myrmecocystus), cornfield ants (Lasius), and carpenter ants (Camponotus). Harvester ants (Pogonomyrmex and Veromessor), and spine-waisted ants (Aphaenogaster), are frequent hosts for anteater scarabs in the southwest U.S. The heaps of vegetation created by some Formica species, known as "thatching ants," provide the protection and food resources needed for Cremastocheilus beetles to complete their life cycle. 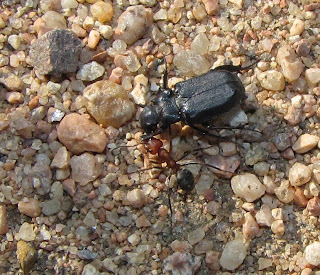 Cremastocheilus being dragged by Formica ant

How do the beetles gain entry to an ant nest protected by hundreds, if not thousands, of short-tempered worker ants? It appears that the beetles "play dead" in areas heavily trafficked by roaming worker ants. The death-feigning posture of anteater scarabs is highly convincing: motionless, with legs outstretched. Thatching ants are scavengers and sometimes predators, so any morsel of protein is quickly snatched up and taken back to the nest. 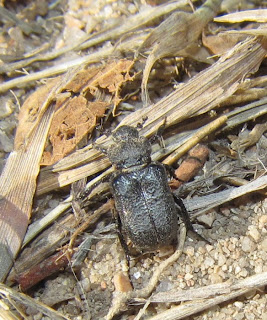 The antennae of Cremastocheilus are normally protected in grooves under the head, but here they are seen on an active specimen

The female beetles lay their eggs singly in the soil around the periphery of the nest mound, and the larvae feed on the decaying vegetation that the ants have more or less composted.

The beetle grubs progress through three instars, an instar being the period between molts, before pupating in oval chambers they create from soil particles. The cycle from egg to adult takes about four months, adult beetles emerging from their pupal cells in late summer or early fall.

The newly-emerged beetles make their way slowly to the center of the ant nest, accumulating the colony scent along the way and presumably rendering themselves incognito. The adult ants are also largely dormant during the winter. Come spring, the beetles begin feeding on ant larvae. 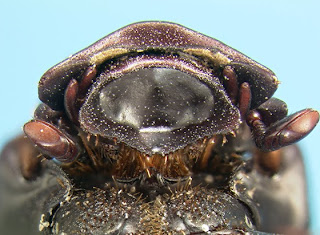 Close-up of mentum on underside of the beetle's head © Jeff Gruber and University of Wisconsin (Madison) Entomology Dept.

The beetles have unusual modifications to their mouthparts. The mentum is enlarged and shield-like, covering the other mouthparts from below. The maxillae are modified into sharp appendages that pierce the soft cuticle of ant larvae and pupae. The beetle's mandibles are much reduced and function only to help transport liquid food to the mouth.

Cremastocheilus beetles have special brushes of hairs on the hind angle of the pronotum (top of thorax) where it meets the "shoulders" of the elytra (wing covers). These brushes are called trichomes. The hairs are attached to glands that secrete a liquid substance that was originally interpreted as an attractant, or at least a pacifier, to the ants. This is apparently not the case, and the trichomes remain something of a mystery.

Anteater scarabs reach their greatest diversity in the desert southwest, but they can turn up almost anywhere. Do a double-take when you expose an ant colony under a stone or board. There may be a Cremastocheilus or two among the ants. Excavated ant colonies usually yield twenty or thirty beetles or their larvae, but some nests may host up to 200. 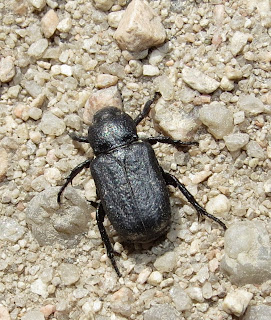