It must be spring. Love is in the air, on twigs, on the ground....at least if you are watching insects. They are courting and mating everywhere. My last couple of outings afield on the plains here in eastern Colorado have given me the opportunity to witness some insect romance up close; and I remembered to use the video function on my camera, too. 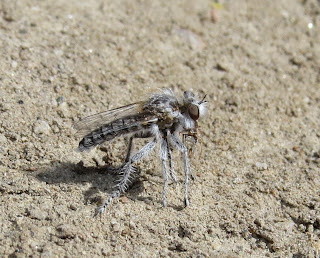 One particularly abundant insect in early spring is a small robber fly, family Asilidae, possibly in the genus Ablautus. Adults of this dipteran measure only about 6-7 millimeters, and they are sand-colored, so rather difficult to see. They prey on insects smaller than they are. The one in the image above has killed a leafhopper. 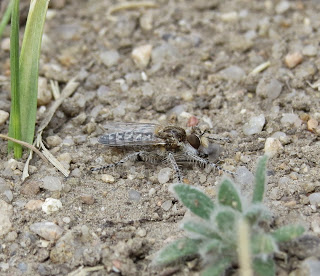 Males are very energetic, and once engaged in courting a female, they are not easily frightened away. So, once I discerned there was a pair of the flies on the ground in front of me, I stopped and watched. This is the amazing result. The male alights near the stationary female, then flies and alights again, sometimes sidling into a different position. Eventually, he waves his front legs in front of her and rocks up and down. It is quite a display. 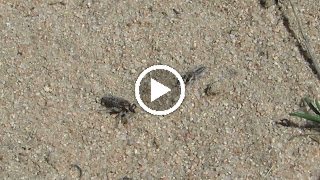 This next video is of a different pair of flies, perhaps a little farther along in the process, because it has an, uh...."happy ending." The male is the one with the smile on his face. 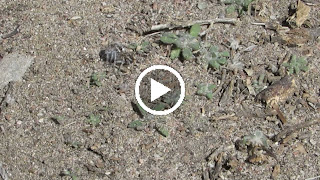 Many flies have elaborate courtship rituals, but asilids (robber flies) have some of the fanciest. I was lucky enough to also capture video of the aerial display of Heteropogon macerinus in Ohio a couple of years ago. 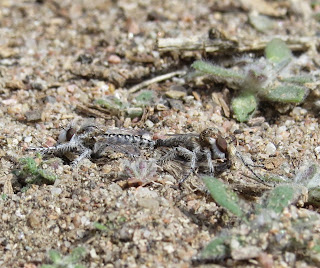 I urge you to find your own examples of "bug love," and document them with your camera, even your smartphone. There are plenty of places to share the results online. Maybe your video will even go viral on YouTube. In any event, we stand to learn a good deal more about insect behavior through the efforts of curious citizen scientists.