Colorado Springs is blessed with a number of concrete bike trails throughout the city, including parks like Garden of the Gods. At this time of year, one can find numerous insects, spiders, and other arthropods parading across these paths. One example I encountered the other day was a male of the Two-spotted Cobweb Weaver, Asagena americana. 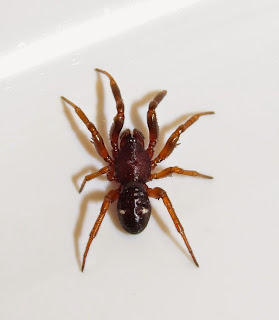 This arachnid could easily be mistaken for some kind of ground-dwelling spider instead of a web-spinning one. Males are only 3.2-4.4 millimeters in body length, but they are stout, with short, muscular legs. The underside of the femur of each leg is studded with short teeth and/or spurs. Females are much more delicate in appearance by comparison, but only slightly larger (3.5-4.7 mm).

While most male spiders go wandering in autumn, this is one of those species found most commonly in spring. Males have been collected from May through July, females May through August. The species ranges across most of North America.

Being conspicuous has its price. Male and female Asagena americana are frequent victims of Black and Yellow Mud Dauber wasps that sting them into paralysis and stuff them in a mud cell as food for the wasp's larval offspring. 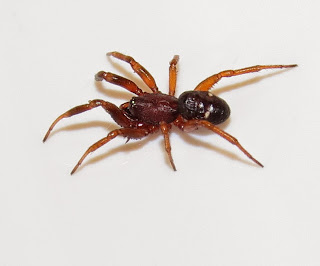 Another interesting feature of the male is his "singing" mechanism. The rear of the carapace bears a "stridulating organ" on each side of the pedicel (the narrow connection between cephalothorax and abdomen). The front edge of the abdomen has a semicircular hardened plate that apparently rubs against the stridulating organs to create sound. 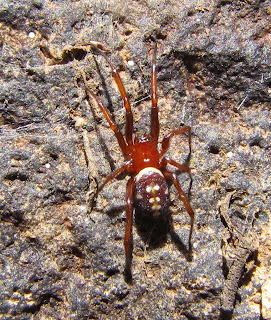 A related species, Asagena fulva, is common in the southwest U.S., north to Oregon and east to Florida. It is slightly larger, females ranging from 3-5.9 mm, males 2.4-5 mm. They appear "redder," with more white markings than their two-spotted cousins. I found them commonly under stones, garbage barrels, and other cover in the Sonoran Desert of Tucson, Arizona. This species might be an ant specialist, as entomologists have found them camped out in webs at the edge of harvester ant nests, presumably ambushing worker ants as they leave, or return to, the nest.

Both of these species were formerly classified in the genus Steatoda, several species of which are frequently mistaken for black widows. 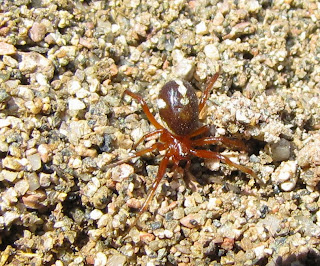