Parasitoid wasps, those species in which the female incapacitates its host, and often caches one or more victims in a burrow, mud nest, or natural cavity, are not above stealing prey from others of their own kind, rather than doing an honest day's hunting. Such was the case I captured recently on video, while watching a Podalonia cutworm hunter in my Colorado Springs neighborhood.

Walking a path through degraded shortgrass prairie habitat, I suddenly noticed this wasp, with her prey, in the middle of the trail. She may have been feeding on the caterpillar's hemolymph (blood), or just making sure the larva was properly paralyzed. 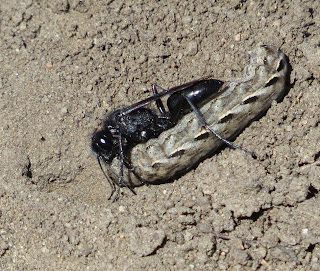 She was nearly motionless for some time, so it came as a bit of a shock when it became apparent she was at the very entrance of a burrow she had excavated before going hunting. Here, in the video clip below, she finishes opening the tunnel, then drags her prize underground. Notice she is a "puller," carrying "armloads" of soil out of the nest rather than scratching it out behind her in a fountain of sand like sand wasps do. 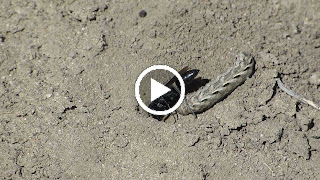 Emerging from the tunnel after burying the cutworm, the female wasp suddenly took flight. I heard a loud buzzing and noticed she was engaged in a literal knock-down drag-out battle with another female Podalonia. The tangle of wings, legs, and bodies persisted a surprisingly long time before the two separated. 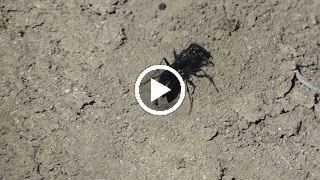 I could not tell who the victor was, until a wasp dragged the caterpillar back out of the nest burrow. Clearly, the winner was the usurper, and she was now claiming her spoils. 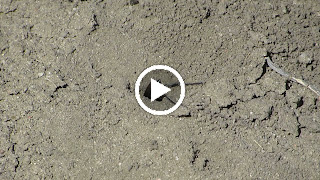 What is revealing about the complex instincts of hunting wasps is how their internal "program" demands they follow a strict sequence of behaviors, regardless of circumstance. So, the wasp repeatedly stung the already-paralyzed caterpillar, as it would if it had hunted the larva instead of pilfering it from the other wasp. 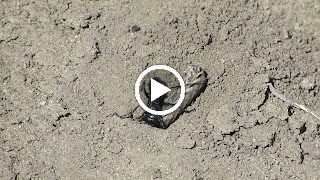 This drama was playing out in mid afternoon, and I had to get back home to eat something, feed and walk the dog, and whatever other chores I had been neglecting. Consequently, I could not determine whether the thief had not yet excavated her own burrow. She deposited the caterpillar and scurried seemingly randomly before beginning to dig. Perhaps she was opening her own burrow, or digging a new one. She tried digging in another, nearby spot as well, but I had to leave before the whole situation played out completely.

When I left, the original wasp had returned, and the paralyzed caterpillar at the center of the robbery was, ironically, sitting equidistant from both wasps. For all I know, the honest wasp was able to reclaim her property. 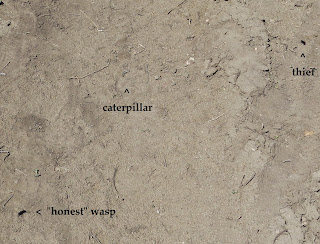 Every day in the world of "bugwatching" is an adventure, and your likelihood of witnessing such captivating episodes increases the more time you are outdoors looking. Sure, there is a fair degree of luck involved, but I guarantee you will see and hear many amazing behaviors if you are the least bit alert.