Caterpillars have it hard in life. Everything is out to get them, especially wasps. Ichneumon and braconid wasps lay eggs on them. Chalcid wasps lay eggs in them, and predatory wasps in the families Vespidae and Sphecidae sting them. Among the vespid wasps are mason wasps, of which Euodynerus hidalgo is typical. 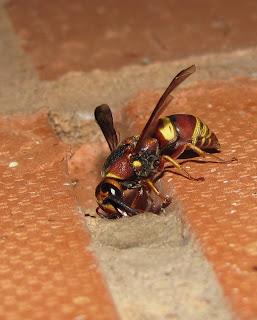 This species ranges across the United States from the Atlantic to Pacific coasts, and is divided into three subspecies. Nancy Collins was kind enough to help me find the above example of E. hidalgo hidalgo in Mission, Texas on June 6, 2010 at the visitor center for Bentsen Rio Grande Valley State Park.

The female wasp was plastering mud in the mortar crevice between bricks on the exterior wall of the building. They normally nest in pre-existing cavities including the abandoned nests of other wasps, or old solitary bee burrows. So, old nests of Black and Yellow Mud Daubers (Sceliphron caementarium), and even the nests of paper wasps (Polistes) are fair game for homesteading.

More life history information is known for the subspecies E. hidalgo boreoorientalis, which occurs along the Eastern Seaboard. I found a couple specimens in Cape May Point State Park, New Jersey on October 18, 2010. Note that this subspecies has almost no red markings, being mostly black with sparse yellow markings. Thanks to the dedicated work of Karl Krombein, we know this subspecies nests mostly in old bee or beetle borings in twigs and stalks. 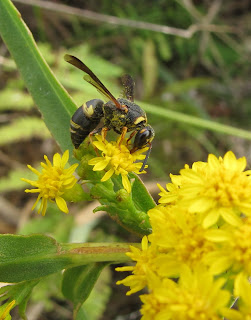 According to Krombein’s observations, nests may consist of one to eleven cells, arranged linearly along the length of the tunnel. Each cell is furnished with several small caterpillars, paralyzed by the sting of the female wasp. An egg is laid in the cell, then a partition of sand or soil is fabricated and a new cell is created atop the previous cell. The egg and larval stages were completed in about 7-9 days at the Kill Devil Hills site in North Carolina where Krombein did most of his research. Adult male wasps emerged from the pupae in about 14 days, whereas females emerged after 19 days. Krombein suspects that at least two generations are produced each year.

Many members of the genus Euodynerus have a blocky or “chunky” appearance, especially the thorax with its angular edges. E. hidalgo is identified by the strong carina (ridge) on the front edge of the pronotum (collar-like part of the thorax abutting the head), and the thin, slightly upturned hind margins of the second and third dorsal abdominal segments. Male specimens are easily recognized by the hooked tips on the antennae. 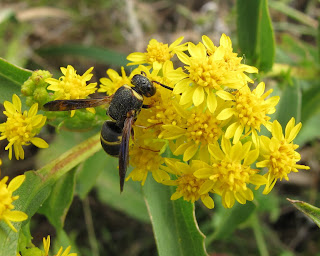 Like most mason and potter wasps in the subfamily Eumeninae, this species is frequently seen on wildflowers feeding on nectar. Look for these and other wasps nesting in or on old barns and other dilapidated wood buildings. Some wasps will build mud or paper nests, while others will use the holes where rusted nails have fallen out. 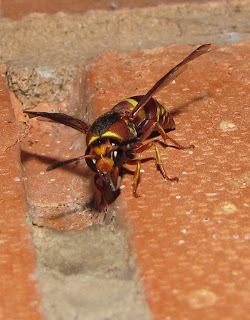 Sources: Karl V. Krombein’s masterpiece, Trap-Nesting Wasps and Bees: Life Histories, Nests and Associates, published in 1967 by the Smithsonian Press, is a 570 page bible for anyone interested in solitary wasps and bees. Online, you may find this ”Identification Atlas of the Vespidae of the northeastern Nearctic Region” to be helpful. It is well-illustrated, a product of the Canadian Journal of Arthropod Identification.