Few insects are so conspicuous and arresting as to be granted a common (English) name, but the Great Golden Digger wasp, Sphex ichneumoneus is one of them. This large, colorful solitary wasp is so regal that one can’t help but notice and admire it. 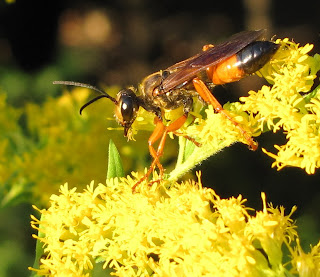 Sphex ichneumoneus is a common wasp with a transcontinental distribution in North America. I have personally seen this species in Oregon, Ohio, and Massachusetts, but it ranges all the way to Peru and Brazil. At 15-27 millimeters long, they are not easy to ignore, either. Most of the time one sees them on flowers foraging for nectar.

Females are fossorial (diggers) that excavate burrows in the soil. In contrast to sand wasps which actively kick out sand behind them as they go, Sphex wasps gather loads of soil in their front legs, under their “chin,” and back out of the hole, depositing the load a short distance from the nest. Richard Walton has a fantastic online video of this species that chronicles the nesting behavior of a typical individual female. 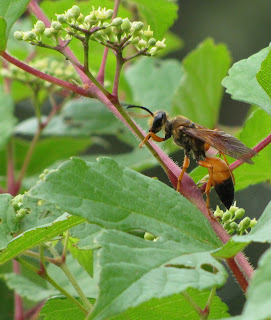 The female wasp hunts katydids as food for her offspring, paralyzing the large longhorned grasshoppers with her sting and flying or lugging their limp bodies back to her nest. This must take a Herculean effort, but the wasp appears nonchalant, though determined. She drops her prey at the doorstep, enters her nest to inspect it, then retrieves her prey and drags it head first into the burrow. This pat sequence of behaviors has stimulated researchers to test the wasp’s patience. At least two observers have teased a wasp by repeatedly moving her prey away from the doorstep, causing her to move it back to the edge, inspect the nest again, then come back for the prey, over and over. So persistent are these wasps that every subject outlasted its human tormenter!

Host katydids victimized by Great Golden Diggers include the formidable coneheads in the genus Neoconocephalus, and slightly more helpless species in the genera Orchelimum, Conocephalus, Scudderia, Amblycorypha, Neduba, and Atlanticus. Tree crickets (Oecanthus) and leafroller crickets (Gryllacrididae) have also been recorded as prey.

A typical nest burrow is vertical or nearly so, terminating in two to seven individual cells. Several prey insects are stored in each cell, though it takes fewer of the larger katydids to provide for a single larval wasp.

Even though this species is solitary, several females may dig their nests in the same general vicinity, giving the appearance of a “colony.” Find one and you may find others nearby. 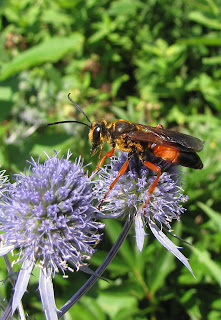 Watch for males perching on flowers, foliage, and other high points, themselves watching for females. The golden pubescence and bi-colored abdomen of this species make it impossible to mistake for any other wasp of that size, including other species of Sphex. 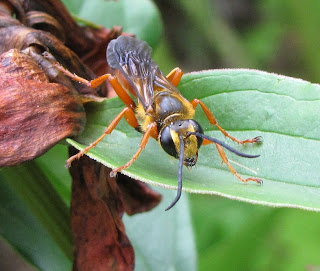