Even entomologists are not immune to pest insects in their homes. We are just a little more fascinated than we are revolted. So, when I found a tiny beetle crawling on the bathroom counter of my Tucson apartment on October 20, 2010, I naturally wanted to know more about it. I thought I had a good idea of its identity, but I was wrong about the species. 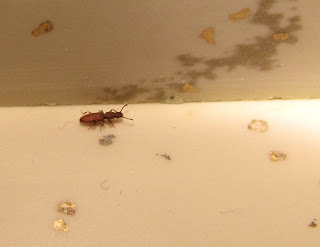 Among the more common “stored product pests” found in the average household are silvanid bark beetles in the family Silvanidae. I know! What would a bark beetle be doing in the pantry? Well, while most species live under bark on trees, logs and stumps, other species are pests of stored grains. They are tiny, prolific, and hitchhiking on commerce to all corners of the globe. 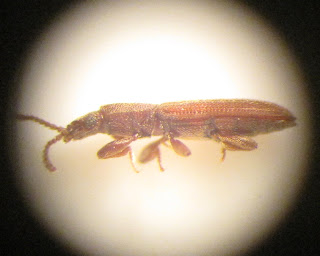 The specimens in the images here are about three millimeters long. I thought they were the species Oryzaephilus surinamensis, the “Sawtooth Grain Beetle.” The common name comes from the tooth-like projections on the insect’s pronotum (top part of the thorax). It turns out there is a nearly identical species, the “Merchant Grain Beetle,” Oryzaephilus mercator, and if I am correct, that is what my specimens are. The Merchant Grain Beetle has slightly larger eyes than its counterpart, such that there is scarcely a “cheek” behind each eye. The Sawtooth Grain Beetle has much more prominent cheeks. 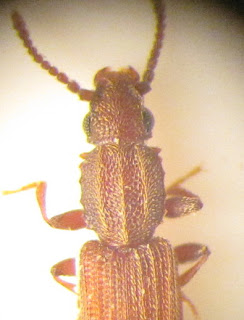 Adults and larvae of the Merchant Grain Beetle occur mostly in cereal grains like oatmeal, rolled oats, and bran, and also brown rice. Great, they get more fiber than I do. Oilseed products like nuts and shelled sunflower seeds are also prone to infestations. At optimal temperatures and humidity, these insects can go from egg to adult in three to four weeks. 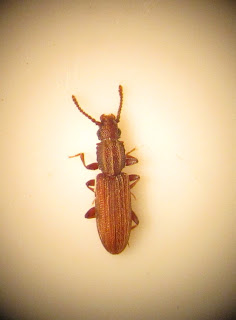 Adult Merchant Grain Beetles can live a surprisingly long time. Their average lifespan is six to ten months, but they are known to live as long as three years. They are strong fliers, too, which allows them to wing their way to new food sources and locations instead of relying on human transport to exotic new locales (the Sawtooth Grain Beetle is flightless). Females of both species deposit between forty and 285 eggs in their lifetime. 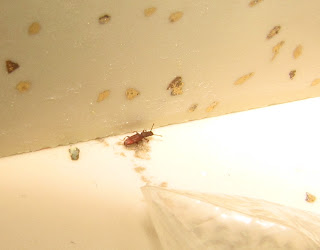 I still don’t know where my beetles are coming from (I found a second one on December 20), and I’m kind of afraid to look. Thankfully, they don’t pose any outright threat to human health. I suppose you won’t want to come over for breakfast now, though….

: A great resource for images of stored product pests in general is the website of the Stored Product Insect Research Unit of the United States Department of Agriculture’s Agricultural Research Service. The entomology departments of many universities produce very helpful online fact sheets about various insects through the Cooperative Extension Service. I found this one from Penn State in my research for this blog entry.