I better start this post with a disclaimer. There is much circumstantial evidence that the wasp depicted here is the species Neamblyjoppa nasutus, but no concrete proof since I did not collect the specimen. It definitely *is* an ichneumon wasp in the family Ichneumonidae, subfamily Ichneumoninae. 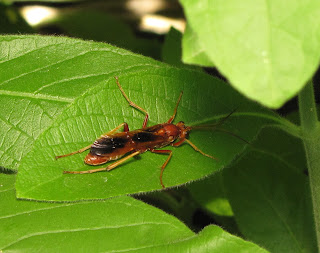 Special thanks goes to Robert Carlson, a renowned authority on ichneumon wasps who got me in the ballpark by properly classifying these images when I posted them to Bugguide.net. I found the wasp at the Tucson Botanical Gardens right in the heart of town on September 14, 2010. It was resting amid dense foliage to escape the heat of the late afternoon. It was roused by my approach, and flew deeper into the vegetation. I eventually relocated the insect and got the head-on image.

When I next visited the collections in the entomology department at the University of Arizona here in Tucson I made it a point to look for specimens of this wasp, and indeed I found at least a close match: Neamblyjoppa, the name scribbled on a piece of paper in the unit tray that held the specimen. Posting this possibility with my images back at Bugguide drew this response from Dr. Carlson:

”Heinrich described Neamblyjoppa in 1962 from a single species that he knew from three females, two in the Canadian National Collection and one in the collection of Henry Townes. The females are amblypygous. The most critical character for recognizing the genus appears to be the unusual clypeus, which bears a median swelling that becomes bipartite below, branching toward the apical margin of the clypeus. Because of this character, Heinrich chose to name the species nasutus. I leave it to you to decide whether the view of the clypeus in your image 457119 hints at this. The coloration agrees well with the Heinrich's description. This sort of coloration seems common among southwestern Ichneumoninae. The holotype of nasutus was collected in Florida Canyon, Santa Rita Mts., at 4000 ft. One of the two paratypes was collected in the Santa Rita Mts., and the other was collected in Sabina Canyon, Tuscon.”

That should read “Sabino Canyon,” and the National Recreation Area is north of Tucson, not in the city limits. Still, the habitat is nearly the same, so that tends to strengthen my suspicions for the identity of the wasp.

Bob Carlson gave me even more of an education by describing the wasp as an “amblypygous” female. When I asked what that meant, he replied:

”The term is one that Heinrich used, but the terminology is also applied in the formal name of the tailless whip scorpions, the Amblypygi, and the Bug Guide page on them provides the derivation of the term. In the case of the kinds of ichneumoninae that are amblypygous as opposed to oxypygous, the ovipositor is very short and the subgenital plate is very broad. Amblypyous Ichneumoninae oviposit into mature larvae or prepupae rather than pupae of Lepidoptera.”

This basically means the wasp has no “tail,” the form the ovipositor takes on oxypygous ichneumonids, streaming behind the wasp like a long tail or spear. 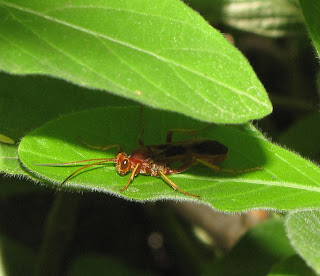 Insects that are not deemed “economically important” suffer a great deal from neglect. Little if anything is known about their life histories, prey, host plants or animals, and geographic distribution. I continue to encourage you to make your own discoveries with camera, notepad, camcorder, or net and killing jar. We collectively have lots of work to do.