Some spiders seem to be much more common indoors than outside. Chief among those are the “longlegged sac spiders” in the genus Cheiracanthium. They belong to the family Eutichuridae, a recent (2014) change. They were formerly in the family Miturgidae, known collectively as “prowling spiders;” but before that they were classified in the sac spider family Clubionidae. 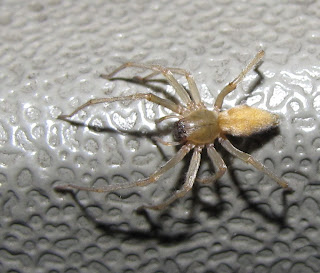 Indeed, telling Cheiracanthium from Clubiona is not at all easy. Cheiracanthium lacks a distinct groove in the center of its carapace (the top portion of the cephalothorax), and there is no obvious tuft of curved setae (hairs) on the front edge of the abdomen. Clubiona does possess those characters. More to the point, you are not as likely to find Clubiona indoors.

The sac spiders are named for the silken retreats they spin. They do not construct silken snares like many spiders, but hunt “on foot” for small insects they can simply overpower. Their tarsal claw tufts, composed of densely-packed hairs, help them grip even slick surfaces. They easily run across the ceiling, defying gravity and giving the average homeowner the heebie-jeebies. 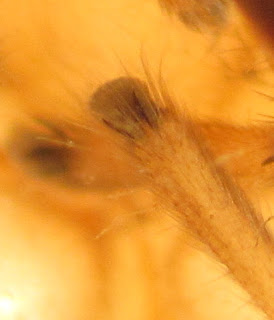 Cheiracanthium are mostly nocturnal, so you are likely to find them resting during the day, inside those retreats. Look for their “sleeping bags” at the juncture of a wall and the ceiling. They seldom, if ever, reuse a retreat, so you may find more than one. Females also deposit their eggs in a sac within a retreat, and the spiderlings that hatch may return to the retreat after minor explorations. The spiderlings will disperse after their next molt, though. 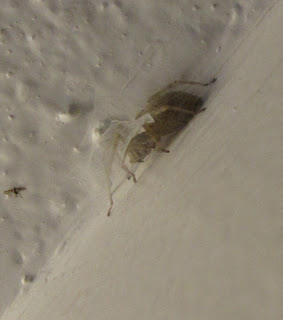 Because these spiders usually stick to the higher reaches of the average house, they don’t often come into contact with the human occupants. All the same, there has been a good deal of historic controversy as to whether longlegged sac spiders are dangerously venomous. Rumors of necrotic bites similar to those sometimes caused by recluse spider bites have largely been put to rest.

Spider bites in general are very rare events, contrary to what you might think from media sensationalism and internet exaggerations. One truly serious threat that is understated or omitted in the discussion of spider bites is the possibility of secondary infection that can turn any minor puncture wound into something much, much worse. Always flush any kind of abrasion or wound thoroughly with potable water. Use antibiotic ointments at your discretion, bearing in mind that overuse of antibiotics has contributed to the rise of “superbugs” that are increasingly resistant to the drugs we throw at them.

Back to the spiders at hand. There are two species of Cheiracanthium in North America, known commonly as “yellow sac spiders” or “agrarian sac spiders.” C. inclusum, is native to the U.S. and occurs coast to coast except the northernmost states. C. mildei is native to Europe but was introduced to North America decades ago. It now has a very widespread distribution in the states, including New England and Washington state. This is the species most often encountered indoors. Both species are medium-sized, the body length of mature individuals varying from 4-10 millimeters, males on the smaller end of the spectrum. 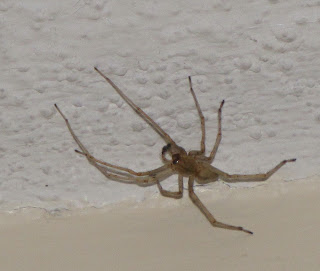 Mature and penultimate males (specimens that have only one molt remaining before adulthood) can be recognized by a “leggier” appearance and the modified pedipalps that make the spider look like it is wearing boxing gloves (see image above). 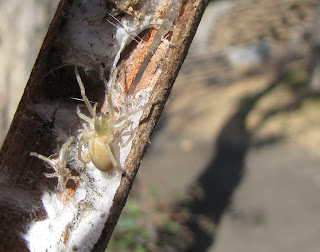 There are some very good internet resources on this genus of spiders, including this fact sheet from Penn State University, and this one from Washington State University. Do go offline, though, and see if you can’t find one of these spiders in your own home, or possibly empty retreats that the spiders once occupied.