The beginning student of Hymenoptera (the order of bees, wasps and ants) cannot be blamed for misidentifying some members of the group, especially in the field where close-up and magnified views of the subject are impossible to obtain. The bees of the genus Nomada, for example, are easily mistaken for wasps. 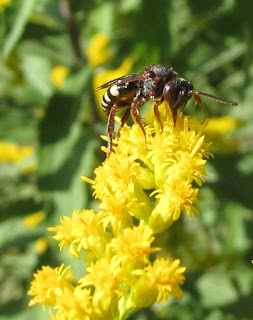 The first time I encountered one of these “cuckoo bees,” I was convinced it was a “beewolf” wasp in the genus Philanthus. After all, there was a picture of Philanthus politus in Howard Evans’ wonderful book Wasp Farm that was a dead ringer for what I saw. Well, black-and-white photos don’t translate too well, and that species of beewolf does not occur in Oregon, where I saw my “wasp.” 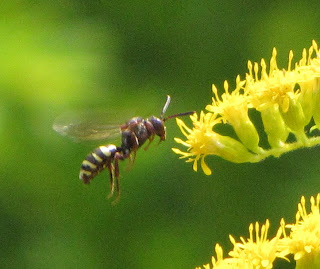 There are more than 300 species of Nomada in North America. They are kleptoparasites of other solitary bees, meaning that their larvae feed on the pollen and nectar stored for the larvae of the host species. Members of the genera Andrena and Agapostemon are the common hosts for Nomada. Consequently, cuckoo bees are usually seen in the early spring, when Andrena bees are nesting. Watch for Nomada bees flying low over the ground in sunny openings in woodlands and along forest edges.

Because cuckoo bees exploit the hard work of the host bees, female Nomada have no “pollen baskets,” or dense brushes of pollen-collecting hairs on their bodies. They are quite naked, in fact, which adds to their wasp-like appearance. 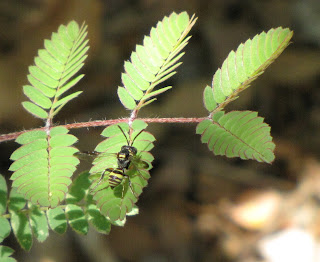 Compare the bees in these images with the Cerceris wasps from last week. You may have a hard time telling the difference. I did, too. For a bit I was convinced I had images of a Nomada bee instead of a weevil wasp. 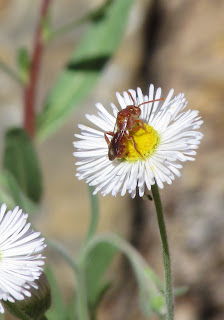 There is some consolation in the fact that our current scientific understanding of the phylogeny of bees and sphecoid wasps shows that the two groups are closely related. Sphecidae, Crabronidae, and all the bee families are now grouped under the superfamily Apoidea. Bees are apparently just wasps that at some point in their collective genetic lineages stopped hunting prey and started gathering pollen and nectar. Feel better now?