Wasps are sometimes named after their larvae. This is certainly true of many of the common sawflies in the family Tenthredinidae. Case in point: the “Bristly Rose Slug,” Cladius difformis. True to its epithet, the larvae of this insect are covered in tiny setae (hairs) and feed voraciously on roses. I was lucky enough to document both the adult and immature stages in a friend’s garden in Redondo Beach, California last month. 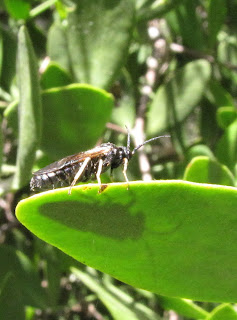 I spotted the adult female wasp on the morning of May 16 as she basked in the sun and groomed herself on a leaf adjacent to a rose bush. This is not a large insect, only about 6 mm in body length. 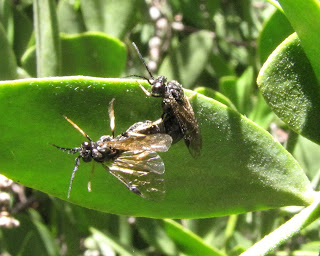 A male then suddenly appeared, and just as suddenly they were copulating. Note the sexual dimorphism, especially in the antennae of the male. This branching type of antenna is termed “pectinate” and is not uncommon in some wasps and beetles. The couple soon became unhitched and the male went his merry way. 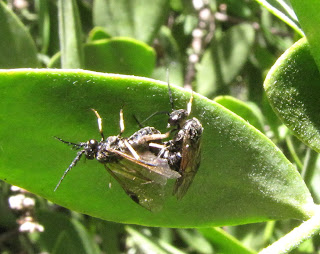 The female wasp, had I been able to follow her long enough, would have laid her eggs in a rose leaf. She uses her saw-like ovipositor (hence the common name of the family) to cut into the upper surface of the midrib vein and create a pocket where she will deposit a single egg. The process is repeated several times on the same leaf. The ovipositor is a complex arrangement of a “lance” and at least one pair of “lancets,” all normally concealed inside a blade-like sheath when not being deployed. The lancets act in concert to cut through the leaf tissue, braced by the lance.

The tiny larvae that emerge from the egg begin to skeletonize small portions of the leaf. The larvae go through five instars (periods between molts), and their appetites seem to increase with each molt. Eventually they are creating enormous holes in the rose leaves. 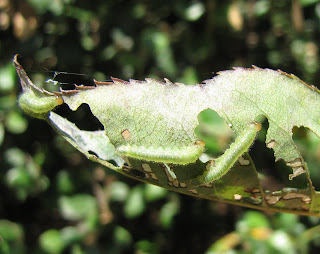 I found several larger larvae (12-13 mm, nearly mature) on May 23. Their resemblance to caterpillars is obvious, but they have more pairs of prolegs (“false legs” that run the length of the abdomen) than do larvae of moths and butterflies (which have five or fewer pairs of prolegs). It is easy to see why this insect is considered a garden pest, given the heavy damage it can inflict. It is also known to feed on raspberries and strawberries. The larvae eventually pupate in a papery cocoon.

It is assumed that the Bristly Rose Slug was introduced to North America from northern Europe. Many authorities in fact synonymize Cladius difformis with Cladius pectinicornis of the Old World. David R. Smith, a renowned expert on sawflies here in North America, asserts that the two are distinctly separate species. The Bristly Rose Slug occurs on both coasts of North America, and from Nova Scotia to British Columbia. It seems to range only through the northern third of the United States except for the coastlines. 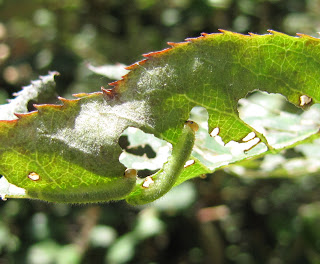 There are not many options available for control of this species, so handpicking the larvae off of leaves may be your best bet. The biological control “Bt” (Bacillus thuringiensis) is not effective.

There is more information, and more images, available online, of course, including the complete life cycle in images here.