My recent trip to southern California in late May yielded some fine additions to my image database of wasps. One of the most photogenic species I encountered was a “weevil wasp,” Cerceris sextoides. These members of the family Crabronidae are known to hunt weevils and other beetles as food for their larval offspring. I didn’t find any females this time, though, only the territorial males. 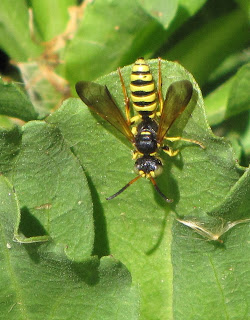 Male solitary wasps tend to emerge before the females, the better to establish territories or seek out burrows where virgin females are likely to pop out. The male C. sextoides that I observed repeatedly perched on vegetation and maintained a vigilant eye for potential competitors. They would frequently fly out in pursuit of similarly-colored eumenid wasps, eventually resuming a perch, usually in a different spot. Some members of the genus are known to scent-mark stems and other objects to reinforce their territorial boundaries, but I am unaware if that applies to the males of this species. 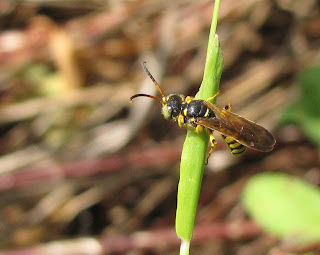 Cerceris sextoides is a common wasp in the Pacific coast states, and extreme south-central British Columbia. It ranges inland through Idaho, northwest Utah, and northern Nevada. Look for it from May to October in a variety of life zones, from Lower Sonoran desert to high elevation Canadian. 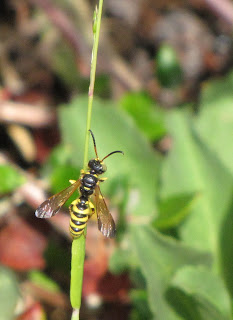 The weevils Sitona californius and Trigonoscuta pilosa are recorded as prey for this wasp. Females ferret out their prey, paralyze it with their sting, and ferry it back to their burrow. Nests are typically excavated in sandy clay or gravelly clay. The horn-like process on the clypeus (“upper lip”) of the female probably assists her in digging. 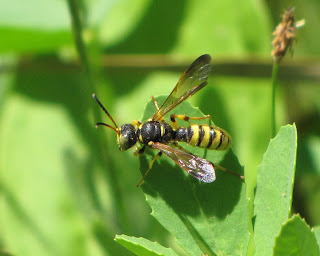