Most wasps, and all insects for that matter, are under ten millimeters in length. They are quite literally The Smaller Majority, to quote the title of Piotr Naskrecki’s remarkable book. Among those most easily overlooked species are the parasitic wasps in the family Chalcididae. Chalcids are heavily-armored, mostly compact insects with “thunder thighs” on their hind legs. The hind femora are greatly swollen and the hind tibiae bowed to fit the curvature of the preceding leg segment. This anatomical attribute helps them to quickly jump away from danger and take flight. 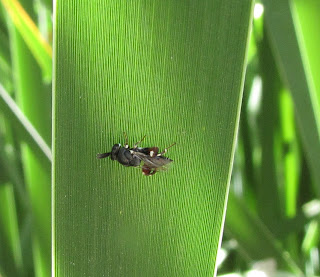 Meet the genus Brachymeria, with 26 species known for North America. These 3-6 mm wasps are not uncommon primary and secondary parasites of the larvae of Lepidoptera and muscoid flies. The wasps emerge from the pupae of their hosts. Some species have been reared from grasshoppers as well, but probably as parasites of tachinid or sarcophagid flies that were themselves parasites of the grasshoppers.

I have found the adult wasps in the vicinity of aphid colonies, lapping “honeydew,” the sugary liquid waste products secreted by aphids. Here in Arizona I also find them seeking shade in the heat of the day, often among cattails or on shaded cottonwood leaves near artificial wetlands. The occasionally visit flowers as well, such as wild carrot, Daucus carota. Sometimes, an individual wasp will “play possum,” hugging its legs to its body and remaining motionless when disturbed. 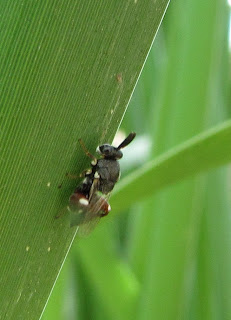 According to accounts of the life cycle of Brachymeria fonscolombei, a common, holarctic species, female wasps use their ovipositors to inject eggs into the host larva. While more than one egg may be deposited in a host, eventually only one larval offspring will mature and emerge from the host pupa. The total developmental period from hatching of the egg to adult wasp emerging is about 20-27 days during favorable weather conditions. An overwintering generation can take approximately 155-180 days to complete its life cycle.

It is quite possible that Brachymeria fonscolombei is an important agent in limiting the numbers of blow flies and flesh flies that infest small animal carcasses. Likewise, other species are probably important in the regulation of other pest flies, and pest caterpillars. 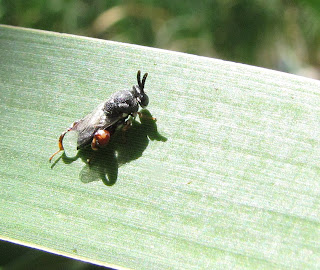