Sometimes, the worst enemy of a wasp is another wasp. Paper wasps in North America have much to fear from a stealthy little ichneumon wasp named Pachysomoides fulvus. I had the good fortune of finding one biding her time in the vicinity of a nest of Northern Paper Wasps, Polistes fuscatus in Adams County, Ohio last month. 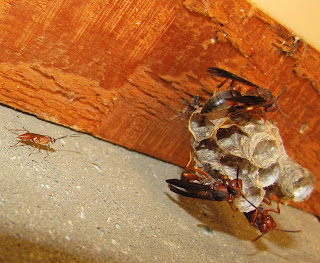 This parasitic wasp ranges from New York to Florida, and west to California and British Columbia, but does not appear to be abundant anywhere.

The female wasp lays her eggs on larvae or pupae of paper wasps inside the cells of the exposed paper comb. Young nests populated only by the foundress are especially vulnerable since the “queen” must leave the nest to hunt food for her offspring. Interestingly, an image over at Bugguide.net appears to show one of these wasps ovipositing in the wall of a cell that has at most only an egg in the bottom. Perhaps the larval ichneumon would emerge once the larval paper wasp had hatched. 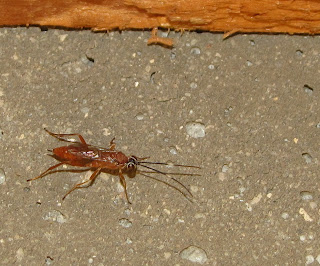 I found more detailed information on the life history of Pachysomoides fulvus difficult to come by online, at least without buying access to articles from journal warehouses like Jstor. I have also packed up all my books now in preparation for moving. I might revisit this unique wasp, and will alert you if I am able to add more.

There is a second species of Pachysomoides in the U.S. that bears the unfortunate name of P. stupidus. Considering it is willing to confront a population of much larger wasps, the epithet might be appropriate! P. stupidus occurs in the southeast, from North Carolina to Florida and Texas and southern Illinois. It is an ornate, black and white banded insect with orange legs.

In this species, the female wasp lays several eggs on a pre-pupal Polistes grub. The larvae that hatch from those eggs then feed gregariously as external parasites on the pupa. Because the larval paper wasp spins a silken cap over its cell before pupating, the parasitic ichneumon larvae can feed undetected by the adult wasps on the exterior of the nest. Up to thirty-one larvae have been observed on one paper wasp pupa (Pickering, 1980). 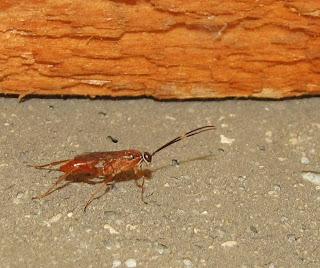