Have you ever been involved in a hit-and-run accident? If so, then you know what it feels like to be a scarab beetle grub being attacked by a scoliid wasp. The only difference is that the insect encounter is no accident. Female scoliid wasps actively seek out the beetle grubs as hosts for their larval offspring. Here in southern Arizona, one of the largest and most conspicuous of the scoliids is Triscolia ardens. 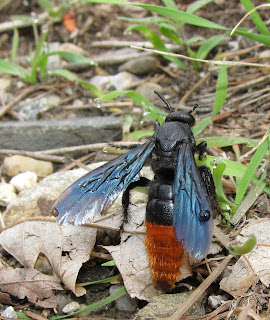 T. ardens is the only member of its genus in North America north of Mexico. It occurs from Texas to southern California and is relatively common. Females are robust, with short antennae. Males have long antennae and sport a three-pronged "pseudosting" at the tip of the abdomen. The remainder of this post will treat scoliids in general because so little is known about the biology of individual species.

Scoliids of both genders can be found visiting flowers, especially milkweed, seep willow (Baccharis), saltcedar (Tamarix), desert willow (Chilopsis), mesquite (Prosopis), scalebroom (Lepidospartum), and buckwheat (Eriogonum). At the end of the day, the wasps bed down singly on vegetation, remaining alert but not not terribly motivated to move as the desert temperatures begin to fall. 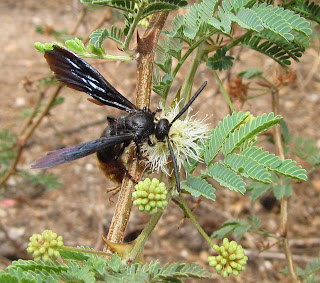 Their life cycle can be generalized as follows. The female wasps fly low over the ground, somehow divining the presence of subterranean scarab beetle grubs. Once one is detected, the wasp digs it up, using her densely spiny legs to send the soil flying. Once she unearths the grub, she stings it into paralysis. This allows her to lay a single egg on the grub. After she accomplishes her mission, she re-buries the grub and flees the scene of the crime (some species have been observed moving the grub deeper into the soil and fashioning an earthen cell around it before depositing an egg and sealing the tunnel). The beetle grub apparently never recovers from its coma. The egg of the wasp hatches, and the larva that emerges will feed as an external parasite on its host for about a week or two before spinning a silken cocoon and pupating. Most North American scoliids overwinter in the pupal stage. 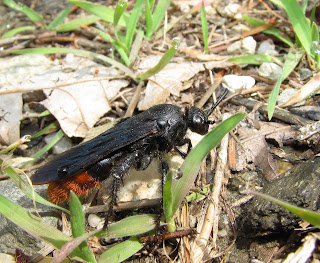 The size of the mature wasp is dependent on the size of the host beetle grub. Even the largest Triscolia ardens seldom exceed about 30 millimeters in body length, but one frequently finds “dwarfs” that obviously suffered a lack of nutrition in their youth. Tropical scoliids, however, are among the largest (certainly heaviest) wasps in the world, exceeding 50 millimeters in body length.

Other online resources include this PDF on scoliid wasps of Florida. It is an excellent introduction to the family as a whole, treating Florida scoliids in particular. Another PDF on Scoliidae of California addresses some southwestern species but it appears incomplete. 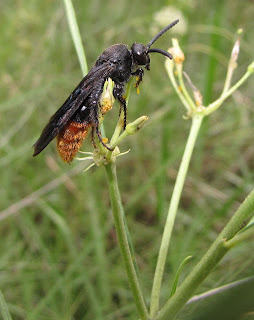 Clearly, much remains to be learned about these highly attractive and obvious wasps. Any documentation with video is likely to be a first, or nearly so; and host associations are almost entirely lacking for our native scoliids (some species have been introduced to the U.S. to control exotic scarab pests).