Here in southern Arizona there are several species of paper wasps in the genus Polistes. What intrigues me is that you seldom find more than one species in any particular location. At the least, one species is usually dominant and other species scarce. Here in the city of Tucson, one of the more abundant urban species is P. arizonensis. 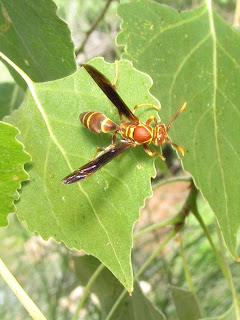 At first glance, this species could be mistaken for Polistes exclamans, a species common in the eastern and southern U.S. Indeed, P. arizonensis was once considered a subspecies of P. exclamans. The Arizona wasp only ranges from Arizona to southern California and Mexico.

One of the favorite places for P. arizonensis to nest is under collapsed palm fronds. Several large colonies can coexist in close proximity under these weathered but sturdy leaves. Here is an example I found at the Sweetwater Wetlands in northwest Tucson. 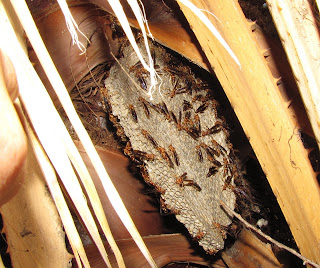 I have found several female (worker) wasps overwintering on such insulated nests, so the large combs may represent the expansions of the previous year’s occupants. Well, that was my theory until I took some of these old nests as souvenirs and found they harbored huge numbers of dermestid beetle larvae that eventually became adult beetles flying freely around my apartment. The invasion of scavengers like dermestids suggests that the combs held deceased wasps (probably in the pupal stage), and those cells are not likely to be re-used. 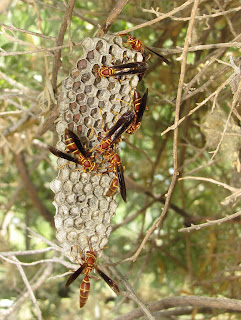 Interestingly, Polistes arizonensis seems just as comfortable nesting amid tangled shrubbery, which leaves them perhaps more exposed to the elements, and their prime enemies: ants. The wasps do have an answer for the ants, though. The female wasps secrete a substance that repels ants, and apply this blackish goo liberally to the paper pedicel that attaches the nest to the substrate (stem, frond, ceiling, whatever). The repellant is produced by sternal glands located internally on the underside of the abdomen. The secretion consists of long-chain carboxylic acids. One study showed that the unsaturated acids (palmitoleic, linoleic, and oleic) in the secretion were effective in repelling at least three species of ants, for up to four days (Dani, et al., 1996).

Like most paper wasps, P. arizonensis seems to prefer hunting caterpillars as food for the larvae back at the nest. Notice the worker chewing up a caterpillar in the image below, prior to feeding the morsel to a larva in one of the cells in the nest. 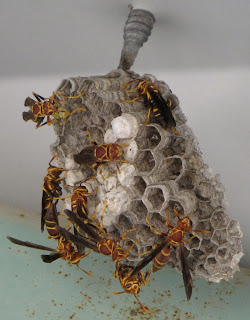 This nest was located under the sheltering roof of a “ramada” overlooking one of the ponds at Sweetwater Wetlands.

You can tell the gender of many kinds of paper wasps by looking them in the face. Females usually have dark, triangular faces, whereas males have square, yellow faces. Such is the case with P. arizonensis. Also note the hooked tips on the antennae, and blunt tip of the abdomen in the male specimen imaged below. 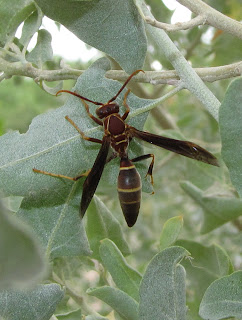 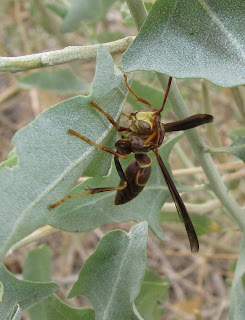 I find that this species is remarkably tolerant of close approaches to its nests. I was able to get these images without the occupants even taking an alarm stance. When paper wasps stand on tip-toe (tip-tarsi?), with wings raised and splayed, it means “You have come too close! Back off now or suffer the consequences.” By retreating even a short distance after such a warning you prevent an attack and the wasps go back to business as usual. Understand that I am not recommending you trespass active colonies, but do use your own judgment and enjoy observing their interactions.